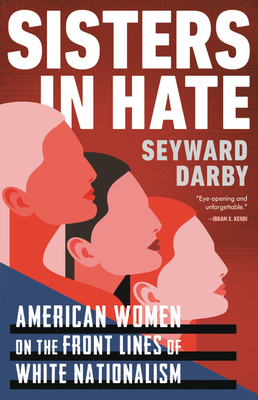 American Women on the Front Lines of White Nationalism

WITH A NEW PREFACE

After the election of Donald J. Trump, journalist Seyward Darby went looking for the women of the so-called "alt-right" -- really just white nationalism with a new label. The mainstream media depicted the alt-right as a bastion of angry white men, but was it? As women headlined resistance to the Trump administration's bigotry and sexism, most notably at the Women's Marches, Darby wanted to know why others were joining a movement espousing racism and anti-feminism. Who were these women, and what did their activism reveal about America's past, present, and future?

Darby researched dozens of women across the country before settling on three -- Corinna Olsen, Ayla Stewart, and Lana Lokteff. Each was born in 1979, and became a white nationalist in the post-9/11 era. Their respective stories of radicalization upend much of what we assume about women, politics, and political extremism.

Corinna, a professional embalmer who was once a body builder, found community in white nationalism before it was the alt-right, while she was grieving the death of her brother and the end of hermarriage. For Corinna, hate was more than just personal animus -- it could also bring people together. Eventually, she decided to leave the movement and served as an informant for the FBI.
Ayla, a devoutly Christian mother of six, underwent a personal transformation from self-professed feminist to far-right online personality. Her identification with the burgeoning "tradwife" movement reveals how white nationalism traffics in society's preferred, retrograde ways of seeing women.

Lana, who runs a right-wing media company with her husband, enjoys greater fame and notoriety than many of her sisters in hate. Her work disseminating and monetizing far-right dogma is a testament to the power of disinformation.

With acute psychological insight and eye-opening reporting, Darby steps inside the contemporary hate movement and draws connections to precursors like the Ku Klux Klan. Far more than mere helpmeets, women like Corinna, Ayla, and Lana have been sustaining features of white nationalism. Sisters in Hate shows how the work women do to normalize and propagate racist extremism has consequences well beyond the hate movement.


Praise For Sisters in Hate: American Women on the Front Lines of White Nationalism…

“Superbly written…Her focus on the lives of three very different women makes her book as readable as a good novel; skillfully combined with history and analysis, her subjects’ stories provide a better picture of the forces driving white backlash than several of the best sellers that attempted to do so in the wake of Trump’s election.”—Susan Nieman, New York Times Book Review

"It's a hell of a story…Darby sketches her subjects finely, with a level of detail that never feels forced."—Danielle Kurtzleben, NPR

"Seyward Darby's
eye-opening and unforgettable book sheds light on the often-hidden movers of
America's growing white nationalist movement: women. By telling the riveting
story of the lives of three women advancing their agendas of bigotry, Darby
exposes the ways in which white nationalism hinges on the contributions of
women."—Ibram X. Kendi, National BookAward-winning and #1 New York Times bestselling author of Howto Be an Anti-Racist and Stamped from the Beginning

"Seyward argues that it’s important to tell stories like these because to defeat hate you have to understand it."—Honor Jones, The New York Times

"In delving into the stories of each woman, one of whom has defected from the movement, Darby offers an unnerving portrait of extremism."—Annabelle Gutterman, TIME

"Darby charts the lives of three women who were or are active in the White nationalist movement. In doing so, she adds dimension to readers' understanding of the complex role that gender plays in bolstering the country's racial regime."—CNN

"Darby’s key intervention is to show just how far these women go in comparison to their male peers."—Josephine Livingstone, The New Repubic

"Darby...offers rigorous research about the rise of white nationalism, how it retains its relevance, and the various reasons white women, including those profiled in the book, are drawn to it."—Evette Dionne, Bitch

"No, I don't want to hang out in the minds of white nationalists, either, but Darby does that on the reader's behalf, promising a book that probes the architecture of "the war embedded in the landscape" of the US. American identity, and the oft-overlooked role of women therein."—Lauren Markham, Lit Hub

“‘Women are the hate movement’s dulcet voices and its standard bearers,’ Seyward Darby observes in Sisters in Hate—a timely, deeply reported, and chilling exploration of the role that women play in promoting white nationalism. By exploring the lives of three different women who have embraced white supremacy, Darby holds a mirror up to American society, illuminating the forces at work within our culture that continue, to this day, to lead to radicalization and violence. Sisters in Hate is a warning cry for the future while also suggesting the possibility of a another, better path forward.”—Pamela Colloff, senior reporter at ProPublica and staff writer at The New York Times Magazine

"A brave, detailed and
insightful portrait of three women who came to advocate the alt-Right's
bigotry, but a portrait that is not simplistic. Especially valuable is its
examination of the women's complex and contradictory ideas about gender and the
appropriate place for women."—Linda Gordon, author of The Second Coming of the KKK

“A gripping, terrifying look at the white women who are pumping racist hate into the heart of their communities.  Darby’s clear-eyed and nuanced insights are essential for ending the racial hate movement in America.”—Kathleen M. Blee, author of Women of the Klan

"Trump 2016.
Charlottesville 2017. How to understand the unavoidable fact of masses of white
women at the core of white nationalism, a movement marked by misogyny? With
enormous care, Seyward Darby discovers the hungers within white women's
attraction to hateful conspiracy theories of anti-Semitism and racism.
Hers is a riveting account that I could not put down."—Nell Irvin Painter,author of the bestseller The History of White People

"Seyward Darby's Sisters In Hate is a masterfully reported and incisive look at the virulence of American extremism, as seen through the eyes of three white women who trafficked in monstrous prejudice. Now, more than ever, it's important to comprehend, and not look away, from the unspeakable damage caused by the far-right, and Darby's book helps us understand the critical role women play in spreading such dangerous ideas."—Sarah Weinman, authorof The Real Lolita

"There is no more urgent story than the resurgence of violent white supremacist groups in America. Sisters in Hate delivers an invaluable examination of the ideologies at this movement's core by tracing the stories of three women who found themselves seduced by lies of hatred. Darby provides the most in-depth reporting I've ever encountered on the role of women in this emboldened movement, while unflinchingly dissecting the misogyny implanted at its ideological core. Those who've spent recent years wondering "how" will find the unsettling answers within this book's pages."—Wesley Lowery, author of They Can't Kill Us All

"This book is essential reading for anyone seeking to understand the origins and depths of modern white supremacy. With dogged reporting and exacting prose, Seyward Darby not only paints a gripping portrait of the women enmeshed in hate movements, she reveals how seeds of racism take hold in minds and communities. Sisters in Hate is terrible and mesmerizing, a book perfectly pitched for this moment."—Evan Ratliff, author of The Mastermind and co-host of the Longform Podcast

"“This book is eye-opening and incredibly timely.”—Booklist

“Darby writes with a clear sense of purpose and makes a concerted effort to understand why women would “fight against their own interests.” The result is a disturbing and informative must-read.” —Publishers Weekly

Seyward Darby is the editor in chief of The Atavist Magazine. She previously served as the deputy editor of Foreign Policy and the online editor and assistant managing editor of The New Republic. As a writer, she has contributed to The New York Times, The Atlantic, The Washington Post, and The Guardian, among other publications.
Loading...
or
Not Currently Available for Direct Purchase