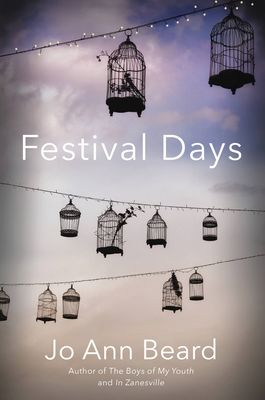 A searing and exhilarating new collection from the award-winning author of The Boys of My Youth and In Zanesville,who “honors the beautiful, the sacred, and the comic in life” (Sigrid Nunez, National Book Award–winner for The Friend)

When “The Fourth State of Matter,” her now famous piece about a workplace massacre at the University of Iowa was published in The New Yorker, Jo Ann Beard immediately became one of the most influential writers in America, forging a path for a new generation of young authors willing to combine the dexterity of fiction with the rigors of memory and reportage, and in the process extending the range of possibility for the essay form.

Now, with Festival Days, Beard brings us the culmination of her groundbreaking work. In these nine pieces, she captures both the small, luminous moments of daily existence and those instants when life and death hang in the balance, ranging from the death of a beloved dog to a relentlessly readable account of a New York artist trapped inside a burning building, as well as two triumphant, celebrated pieces of short fiction.

Here is an unforgettable collection destined to be embraced and debated by readers and writers, teachers and students. Anchored by the title piece––a searing journey through India that brings into focus questions of mortality and love—Festival Days presents Beard at the height of her powers, using her flawless prose to reveal all that is tender and timeless beneath the way we live now.

“Imaginative and precise… These sharp essays cement Beard’s reputation as a master of the form… [she] can evoke many emotions in a single stroke.”—Publishers Weekly (starred review)

“Festival Days shimmers with emotional intensity… evoking the flashes of memory that come to those pausing on the threshold between life and death… Allowing her work to exist beyond the labels of fiction or nonfiction, Beard’s metaphorical patterns evince the imaginative truths that underlie her writing”—Catherine Hollis, Bookpage (starred review)

"An impressive return... [Beard's] topics range from the quotidian to the fantastic, but all are anchored by observant, beautifully written prose that's sure to rank among the year's best."—Town & Country (Must-Read Books of Winter 2021)

“Beard is known as a nonfiction essayist, but her work often reads like suspenseful fiction… this collection of nine essays… continues that formidable track record.”—Bookpage

"Festival Days is profoundly observed and impeccably phrased. No surprises there, then, given Jo Ann Beard’s formidable talents. But it’s actually full of audacious narrative surprises, is darkly moving and, at times, unexpectedly—almost unbearably—suspenseful.”—Geoff Dyer, author of Otherwise Known as the Human Condition and White Sands: Experiences from the Outside World

“‘I love how you love things,’ someone who loves her tells Jo Ann Beard. That love is one reason Festival Days is such a great book. Another is her flair for describing those things in vibrant and felicitous prose. Beard honors the beautiful, the sacred, and the comic in life, and for life’s inescapable cruelties and woes she offers the wisdom of a sage.”—Sigrid Nunez, author of What Are You Going Through and National Book Award-winning The Friend

“Festival Days is an artistic triumph—vividly peopled, elegantly written, and full of surprises. Each essay and story is an electrically-charged tale of loss and partial redemption. Reading Jo Ann Beard is like setting out on a walk with a curious and intelligent friend who is determined to show you how seemingly unrelated things share a secret kinship.”—Adrienne Brodeur, author of Wild Game

Jo Ann Beard is the author of the groundbreaking collection of autobiographical essays, The Boys of My Youth, and the novel, In Zanesville. Her work has appeared in The New Yorker, Tin House, Best American Essays, and other magazines and anthologies. She has received a Whiting Foundation Award and nonfiction fellowships from the John Simon Guggenheim Foundation and the New York Foundation for the Arts. She teaches writing at Sarah Lawrence College.
Loading...
or support indie stores by buying on