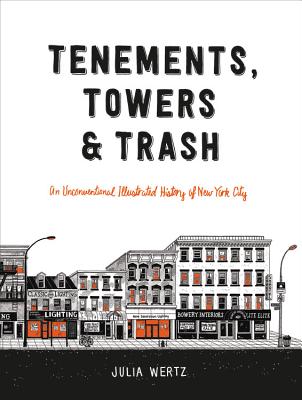 Here is New York, as you've never seen it before. A perfectly charming, sidesplittingly funny, intellectually entertaining illustrated history of the blocks, the buildings, and the guts of New York City, based on Julia Wertz's popular illustrated columns in The New Yorker and Harper's.

In Tenements, Towers & Trash, Julia Wertz takes us behind the New York that you think you know. Not the tourist's New York-the Statue of Liberty makes a brief appearance and the Empire State Building not at all-but the guts, the underbelly, of this city that never sleeps. With drawings and comics in her signature style, Wertz regales us with streetscapes "Then and Now" and little-known tales, such as the lost history of Kim's Video, the complicated and unresolved business of Ray's Pizza, the vintage trash and horse bones that litter the shore of Brooklyn's Bottle Beach, the ludicrous pinball prohibition, Staten Island's secret abandoned boatyard, and the hair-raising legend of the infamous abortionist of Fifth Avenue, Madame Restell. From bars, bakeries, and bookstores to food carts, street cleaners, and apartments both cramped and grand, Tenements, Towers & Trash is a wild ride in a time machine taxi from the present day city to bygone days of yore.

"A passionate anatomy of the city, a book of dramatic streetscapes and hidden histories - mostly of infamous women, like the 19th-century celebrity abortionist Madame Restell, who catered to socialites and built her Fifth Avenue mansion a block away from a Catholic church, supposedly to taunt the faithful....The city rises majestically in these pages. The crowded panels evoke the jostle of urban life. Your eye doesn't know where to settle; there's so much to absorb."—The New York Times

"Julia Wertz's Tenements, Towers and Trash is nothing short of extraordinary. The meticulously researched histories of the various urban landscapes are fascinating, and Wertz's drawings perfectly capture the visual poetry of the city- the ongoing struggle between past and present, and its unique blend of beauty and ugliness. A must for anyone who loves and appreciates the city, as Wertz so clearly does."—Roz Chast

"Obsessiveness, in a sense, is the subject of Julia Wertz's Tenements, Towers & Trash, which was flat-out the most enjoyable experience I had with any book this year."—The Chicago Tribune

"A delight for New York aficionados. Every city needs a version of this artist and her book."
—Kirkus Reviews

"In presenting the life of the city, Wertz captures change as the most important constant trait of New York City, with a vivid eclecticism that makes this an indispensable guidebook to places lost and found."
—Publishers Weekly

"Richly dense and informative yet never dull or pedantic, Wertz's eye for detail and obsession with minutiae pays massive dividends for the reader. Her skill at rendering cityscapes left me breathless with admiration and gut-twisting envy. It's also funny as fuck."—Emily Flake, author of Mama Tried

"A singular voice on a singular place."—Gabrielle Bell, author of Everything Is Flammable

"Julia Wertz's New York is a city of magic and mystery. Her sharply detailed illustrations bring Gotham's streets to life and reveal their secrets. Walkers and history buffs will love being part of Wertz's world."—Esther Crain, author of The Gilded Age in New York, 1870-1910

"A completely new and refreshing way to look at New York City history. You'll be so transfixed by this book's extraordinary imagery that you may forget to turn the page!"—Greg Young, author of The Bowery Boys: Adventures in Old New York

"Showcasing her extraordinary artistic talent, Wertz digs into an eclectic survey of the city's past, and the remaining architectural relics, through her large-format illustrated history, Tenements, Towers & Trash"—Shelf Awareness

"A celebration of city life, of living right on top of your neighbor, of those corner shops that barely stay open for a month and the storefronts that last longer than a century... When you really see a city through Wertz's eyes, you're likely to understand your own city in a different way forever after."—Seattle Review of Books

"Wertz's love of New York and its history enliven the streetscapes in her superb book, a then-and-now tribute to bookstores, music venues, movie theaters, bars and many other spots."—San Francisco Chronicle

Julia Wertz is a professional cartoonist and amateur historian. She has published five graphic novels, including most recently Tenements, Towers & Trash and does monthly history comics for the New Yorker and Harper's Magazine.
Loading...
or support indie stores by buying on