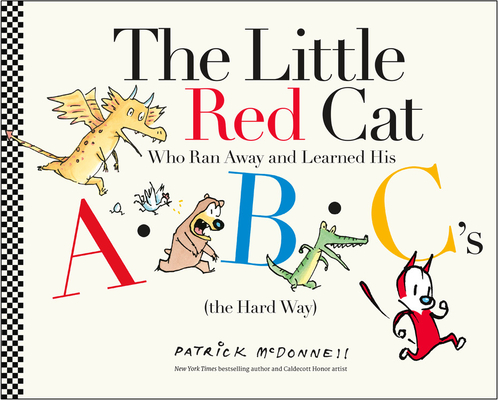 It starts with an ALLIGATOR and a BEAR chasing a CAT. When a DRAGON (and a chicken and an egg!) join in pursuit, things start to get REALLY interesting. A wild and wacky chase through snow and ice, and to jungles and over mountaintops, leads the whole crew to a wonderful realization: They're better off as friends.

From New York Times bestselling author and Caldecott Honor recipient Patrick McDonnell comes an exciting new take on the alphabet book for everyone who has ever wondered what's just beyond the front door.


*"Give this book an F, yes, an F: for fun and funny."
—Kirkus Reviews, starred review

*"Touches of wit and plenty of zip recommend this for lap-sit sharing."
—The Horn Book, starred review

"McDonnell recaps the letters and implied words at the story's end, but there aren't any real stumpers--just the pure pleasure of retelling this manic romp, using the alphabet/illustration combo as cue cards along the way."
—BCCB

"Simplicity doesn't take away from the humor."—Booklist

"This nearly wordless adventure is a beautiful example of how less is more."—The Virginian-Pilot