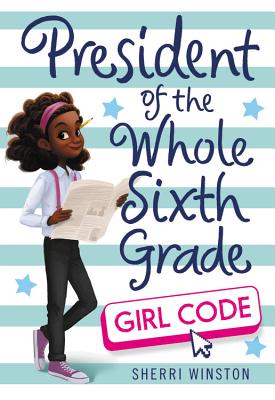 President of the Whole Sixth Grade

Go-getter Brianna Justice is back and on assignment with her local newspaper in this third book in the popular President series!

When budding middle school journalist Brianna Justice learns that Yavonka Steele, rising star of the nightly news broadcast, is looking to mentor a student as part of a program at her school, she's thrilled! That is until she's paired instead with a "boring" reporter from the community news desk.

But when she's asked to interview students from a girls' coding program at Price Academy, an inner-city middle school, this suburban girl has no idea what to expect. Will Brianna learn to ignore stereotypes and embrace the world around her?

Sherri Winston crafts another winning story in the President series, full of humor, heart, and a deeper examination of stereotypes and how they can throw a wrench in middle school life.

Praise for President of the Whole Sixth Grade: Girl Code:* "Thought-provoking and smart and a great springboard for discussions on race and class."—Kirkus Reviews, starred review