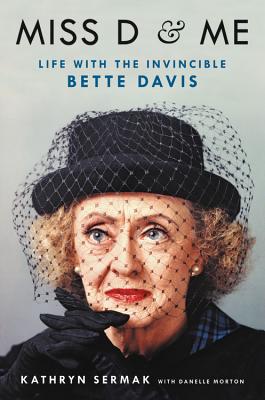 Miss D and Me

Life with the Invincible Bette Davis

For ten years Kathryn Sermak was at Bette Davis's side--first as an employee, and then as her closest friend--and in Miss D and Me she tells the story of the great star's harrowing but inspiring final years, a story fans have been waiting decades to hear.

Miss D and Me is a story of two powerful women, one at the end of her life and the other at the beginning. As Bette Davis aged she was looking for an assistant, but she found something more than that in Kathryn: a loyal and loving buddy, a co-conspirator in her jokes and schemes, and a competent assistant whom she trained never to miss a detail. But Miss D had strict rules for Kathryn about everything from how to eat a salad to how to wear her hair...even the spelling of Kathryn's name was changed (adding the "y") per Miss D's request. Throughout their time together, the two grew incredibly close, and Kathryn had a front-row seat to the larger-than-life Davis's career renaissance in her later years, as well as to the humiliating public betrayal that nearly killed Miss D.

The frame of this story is a four-day road trip Kathryn and Davis took from Biarritz to Paris, during which they disentangled their ferocious dependency. Miss D and Me is a window into the world of the unique and formidable Bette Davis, told by the person who perhaps knew her best of all.

Praise For Miss D and Me: Life with the Invincible Bette Davis…

"America loved
Bette Davis for the great star she was. I had the privilege of being her
friend. She lived by good old-fashioned Yankee standards; she expected much
and gave much; she was forthright, honest, and had a great sense of humor. Kathryn Sermak's book is a beautifully insightful look at the real Bette
Davis."—George Hamilton

"We should all hope that we have a
Kathryn Sermak in our lives whose love and devotion overcame any odds she might
have encountered in her remarkable journey with Miss D. This book is homage to both ladies and
a wonderful read."—Stefanie Powers

"None of us knew or loved Bette
Davis during her later years more than Kathryn Sermak. This is a wonderful book
about one of the greatest women I ever knew--and one of the greatest actresses
who gave us all so very, very much. You'll enjoy this read and realize what a
truly great woman Bette Davis was--and an inspiration to women of all ages."—Robert Wagner

"What a great insight
into the last chapters of an Extraordinary woman's life. Kathryn Sermak tells
it like it was: with candor and style--certainly the Bette Davis I was fortunate
enough to know!"—Greg Gorman,celebrity photographer

"Miss D & Me is a fascinating look at the life of this indomitable star and her young assistant, Kathryn, during the last ten years of Miss Davis's life. It is their inspirational journey, which begins with Miss D as mentor-instructing Kathryn in every detail of work as well as the social graces-and ultimately leads to a devoted friendship. I highly recommend it."—Ann-Margret

"Kathryn Sermak has
given us a well-written and vivid account of her long association with one of
the most remarkable women of the past century: Bette Davis. I read it and was
enthralled."—Olivia de Havilland

"Delightful . . . Miss D & Me details the sweet and deepening bond between the much-feared actress and a timid, young Kathryn Sermak--a pairing set against a steady drumbeat of menace."—New York Daily News

"Endearing . . . Inspired by a fateful road trip the two
women embarked upon through France in 1985, the book - based on Sermak's
extensive archive of datebooks, photographs and audio cassettes - offers an
intimate glimpse into the last 10 years of the screen icon's life, until her
passing in 1989 with Sermak by her side."—The Hollywood Reporter

"When Kathryn Sermak was hired as
Bette Davis's personal assistant in 1979, she was a 22-year-old ingenue who had
no idea who the great movie star was. For the next ten years she would
help the woman she regarded as her mentor and, subsequently, friend, through
her twilight years that brought illness and a devastating betrayal by her
daughter, B.D. Hyman, in a brutal memoir about her mother. Davis's heartbreak
is also keenly felt by Sermak in her deeply personal Miss D And Me. The woman
behind often horrific movie characters emerges as a loyal, kind and vulnerable
person, emotionally maimed by a child she adored."—Daily Mail (named a Best Book of the Year)

Kathryn Sermak is the co-founder of the Bette Davis Foundation and co-executor of the Bette Davis Estate. In addition to Bette Davis, Kathryn has been personal assistant to HH Princess Shams Pahlavi; French actress, Isabelle Adjani; the statesman and journalist, Pierre Salinger; astronaut Dr. Buzz Aldrin, Motown Founder, Berry Gordy Jr.; famed American designer, Patrick Kelly; and the co-creator of Where's Waldo, Michael Gornall. Kathryn was also among the first to receive the Personal Assistant Career Award in 2003. Visit her at missdandme.com.
Loading...
or
Not Currently Available for Direct Purchase