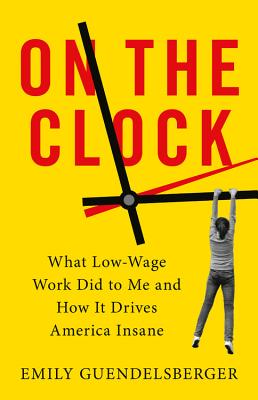 "Guendelsberger paints
a down-to-earth, accessible primer on how dehumanizing and exploitative
American wage labor can be-and what can be done to change it."—Vanity Fair

"Nickled and Dimed for the Amazon age."—Salon

"Seen from Guendelsberger's point of view, America's working class is quivering in stress and fear, hurting from torn-up feet, and all covered in honey mustard. The economic miseries inflicted on working-class people are bad enough, but here Guendelsberger has identified something deeper and arguably worse...We've been brutalized, bullied, and baited into being trained work-animals and not even afforded a corresponding. No wonder our society fell apart."—The New Republic

"In a timely and important look at the harsh realities of the modern American workplace, journalist Emily Guendelsberger recounts her experiences doing hourly labor all over the country: at a Louisville-based Amazon warehouse, a North Carolina call center and a San Francisco McDonald's."—Laura Pearson, Chicago Tribune, 25 Hot Books of the Summer

"ON THE CLOCK reads like a dystopian travelogue, the deckhand's journal from a flaming garbage barge on the shoals of late-stage capitalism. Guendelsberger's journey 'in the weeds' of low-wage America is mordantly funny, devastating and rigorous, a broadside against the exploitation of the many by the few and a warning of how easily our sociopathic economy could all come crashing down, leaving even C-suite executives to subsist on ketchup packets and worthless stock options."—Jessica Bruder, author of Nomadland: Surviving America in the Twenty-First Century

"Guendelsberger's narration is vivid, humorous, and honest; she admits to the feelings of despair, panic, and shame that these jobs frequently inspire, allowing for a more complex and complete picture of the experience. This is a riveting window into minimum-wage work and the subsistence living it engenders."—Publishers Weekly

Emily Guendelsberger has worked at Philadelphia City Paper, the Onion's A.V. Club, Philadelphia Weekly, and the Philadelphia Daily News, and has contributed to the Philadelphia Inquirer, the Washington Post, Politico magazine, and Vice.
Loading...
or
Not Currently Available for Direct Purchase