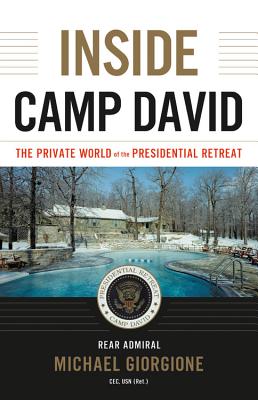 The Private World of the Presidential Retreat

The first-ever insider account of Camp David, the president's private retreat, on the seventy-fifth anniversary of its inception.
Never before have the gates of Camp David been opened to the public. Intensely private and completely secluded, the president's personal campground is situated deep in the woods, up miles of unmarked roads that are practically invisible to the untrained eye. Now, for the first time, we are allowed to travel along the mountain route and directly into the fascinating and intimate complex of rustic residential cabins, wildlife trails, and athletic courses that make up the presidential family room.
For seventy-five years, Camp David has served as the president's private retreat. A home away from the hustle and bustle of Washington, this historic site is the ideal place for the First Family to relax, unwind, and, perhaps most important, escape from the incessant gaze of the media and the public. It has hosted decades of family gatherings for thirteen presidents, from Franklin D. Roosevelt to Barack Obama, including holiday celebrations, reunions, and even a wedding. But more than just a weekend getaway, Camp David has also been the site of private meetings and high-level summits with foreign leaders to foster diplomacy.
Former Camp David commander Rear Admiral Michael Giorgione, CEC, USN (Ret.), takes us deep into this enigmatic and revered sanctuary. Combining fascinating first-person anecdotes of the presidents and their families with storied history and interviews with commanders both past and present, he reveals the intimate connection felt by the First Families with this historic retreat.

Praise For Inside Camp David: The Private World of the Presidential Retreat…

Praise for Inside Camp David

"Inside Camp David gives a first-hand account of the president's most private retreat from an author who ran it. Camp David is part sanctuary, part office, and part vacation destination. Giorgione captures life at the exclusive retreat and offers a glimpse into the lives of presidents and their families when they're seeking a respite from the spotlight."—Kate Andersen Brower, New York Times bestselling author of The Residence and First Women

"A captivating stroll through the storied Maryland mountain retreat seen through the eyes of the Sailors, Marines, gardeners, cooks, handymen and their families who catered to the presidents. Rear Admiral Michael Giorgione, a charming raconteur, takes us behind the scenes and shows why, from Kennedy to Obama, presidents found Camp David (aka Naval Support Facility Thurmont) the ideal place for both white-knuckle international diplomacy and desperately-needed decompression: a walk in these woods can restore presidential sanity."—Chris Whipple, New York Times bestselling author of The Gatekeepers: How the White House Chiefs of Staff Define Every Presidency

"No one has a better understanding of this mountain retreat than the Commanding Officer. Inside Camp David provides an insight into life at this secret hideaway used by presidents and their families over the years. It is an accurate portrayal of life as it is lived by the Commander in Chief away from the White House."—Clint Hill, #1 New York Times bestselling author of Five Presidents

"Toasts a great perk of the presidency, one that almost none of us will ever see... Full of firsthand glimpses into a secret world and fresh insights that may delight even the most politically cynical among us."—Adeel Hassan, New York Times

A "pop history of a vacation spot with a strictly limited clientele.... An easygoing... visit to a place where presidents are 'more reflective, playful, and energized by the hills and forests that surround them.'"—Kirkus

"A complete yet personal history... This intelligent and recommended account is sure to appeal to readers of presidential biographies and American history buffs in general."—Library Journal

"In this intimate and informative book, Giorgione blends the presidential with the personal and casts a loving eye on a seldom seen but consequential place... With grace, candor and humor, he makes what, in academic hands, could have been dry as dust, breathe with life."—Jay Strafford, Richmond Times-Dispatch

"Giorgione weaves palace intrigue, personal reflections from former commanding officers at the camp and histories of the retreat and Thurmont... A glimpse of little-known histories."—Danielle E. Gaines, The Frederick News-Post

Rear Admiral Michael Giorgione, CEC, USN (Ret.) has served a total of 29 years on active duty in the United States Navy and four years at the Naval Academy, retiring in 2010. He has served as the Commander of Camp David for President Bill Clinton and President George W. Bush, as well as working under the White House Military (WHMO) in the East Wing of the White House along with those in command of Air Force One, Marine One, Aides, and other White House Military. He is currently a much sought after speaker and educator throughout the United States and the world.
Loading...
or
Not Currently Available for Direct Purchase