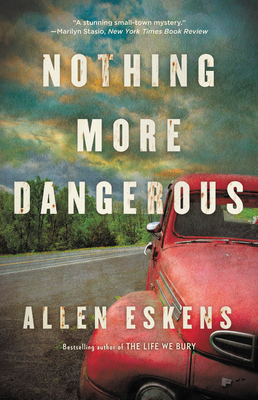 
Praise For Nothing More Dangerous…

"A stunning small-town mystery.... Eskens clearly has an affinity for clever boys like Boady and Thomas; but he also has lovely visions of the mighty trees and secret swimming holes that make them long for summer -- and mysteries to solve."—Marilyn Stasio, New York Times Book Review

"Nothing More Dangerous works well as a mystery, a dissection of hatred and racial prejudice, and a coming-of-age novel. . . . Eskens gracefully moves the novel through the little moments that help to shape people and see the world with a different attitude."—Oline H. Cogdill, Associated Press

"The story is gripping. . . . The characters are intriguing. . . . Eskens weaves a fine mystery that involves layers of racial introspection. . . . Eskens tells us in an author's note that he started this book in 1991 and kept putting it away, never quite feeling it was ready. He can proudly pronounce it ready now."—Ginny Greene, Minneapolis Star Tribune

"Allen Eskens hits it out of the park with his new novel.... More relevant than ever in this divided country... This is a story of hope through an act of love.... It would be a fine supplementary text for high schoolers, especially the discussions of prejudice and where it comes from."—Mary Ann Grossman, Pioneer Press

"Mystery Pick of the Month: This powerful, unforgettable crime novel is a coming-of-age book to rival some of the best, such as William Kent Krueger's Ordinary Grace or Larry Watson's Montana 1948.... This timely stand-alone is a must-read for followers of the best in crime fiction."—Library Journal (starred review)

"Allen Eskens doesn't just tap into the experience of growing up in a rural Southern town; Nothing More Dangerous dissects the inner life of a teen forced to confront prejudice and persecution.... Eskens has the skill to make readers cry... and then cheer."—Shelf Awareness

"Magnificent... Nothing More Dangerous is the next best thing to Harper Lee's To Kill a Mockingbird.... Setting, plot, and characterization are masterfully woven together to create a tapestry of a small town as a tinderbox of prejudice, fear, friendship, and dark secrets." —New York Journal of Books

"Eskens does an excellent job of weaving [the] disparate threads together into a fine blend of mystery and coming-of-age novel. The setting is spot-on, the characters are empathetic and well realized, and the plot is clever and compelling, building suspense until a harrowing denouement reveals all."—Booklist

"Both heartwarming and hard-nosed, Nothing More Dangerous is a coming-of-age page-turner that probes the dark heart of small towns and the resilient strength that keeps families together."—Thomas Mullen, author of Darktown

Allen Eskens is the USA Today bestselling author of The Life We Bury, The Guise of Another, and The Heavens May Fall. His debut novel, The Life We Bury, has been published in twenty-six languages and is being developed for a feature film.

He now lives with his wife, Joely, in out-state Minnesota where he has been a practicing criminal defense attorney for twenty-five years.