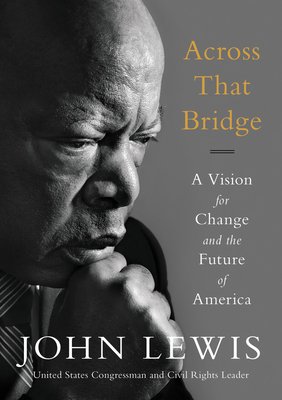 A Vision for Change and the Future of America

Winner of the NAACP Image Award for Outstanding Literary Work/Biography.

In turbulent times Americans look to the Civil Rights Movement as the apotheosis of political expression. As we confront a startling rise in racism and hate speech and remain a culture scarred by social inequality, there's no better time to revisit the lessons of the '60s and no better leader to learn from than the late Representative John Lewis.

In the final book published before his passing, Across That Bridge, Congressman John Lewis draws from his experience as a prominent leader of the Civil Rights Movement to offer timeless wisdom, poignant recollections, and powerful principles for anyone interested in challenging injustices and inspiring real change toward a freer, more peaceful society.

The Civil Rights Movement gave rise to the protest culture we know today, and the experiences of leaders like Congressman Lewis, a close confidant to Martin Luther King, Jr., have never been more relevant. Despite more than forty arrests, physical attacks, and serious injuries, John Lewis remained a devoted advocate of the discipline and philosophy of nonviolence. Now, in an era in which the protest culture he helped forge has resurfaced as a force for change, Lewis' insights have never been more relevant. In this heartfelt book, Lewis explores the contributions that each generation must make to achieve change.

Now featuring an updated introduction from the author addressing the Trump administration, Across that Bridge offers a strong and moral voice to guide our nation through an era of great uncertainty.

Congressman John Lewis (1940-2020) was a leader in the American Civil Rights Movement. He was chairman of the Student Nonviolent Coordinating Committee (SNCC) and played a key role in the struggle to end segregation. Despite more than 40 arrests, physical attacks, and serious injuries, John Lewis remained a devoted advocate of the philosophy of nonviolence. He was the author of Walking With the Wind: A Memoir of a Movement, which was an autobiography of his activism, and was the recipient of numerous awards from national and international institutions including the Lincoln Medal, the John F. Kennedy "Profile in Courage" Lifetime Achievement Award (the only of its kind ever awarded), and the NAACP Spingarn Medal, among many others.