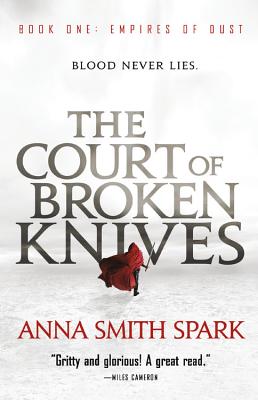 The Court of Broken Knives (Empires of Dust #1)

Perfect for fans of Mark Lawrence and R Scott Bakker, The Court of Broken Knives is the explosive debut by one of grimdark fantasy's most exciting new voices.

It is the richest empire the world has ever known, and it is also doomed -- but only one man can see it.
Haunted by prophetic dreams, Orhan has hired a company of soldiers to cross the desert to reach the capital city. Once they enter the palace, they have one mission: kill the emperor, then all those who remain. Only from the ashes can a new empire be built.

The company is a group of good, ordinary soldiers for whom this is a mission like any other. But the strange boy Marith who walks among them is no ordinary soldier. Though he is young, ambitious, and impossibly charming, something dark hides in Marith's past -- and in his blood.

Praise For The Court of Broken Knives (Empires of Dust #1)…

"It's a bold experiment and feels like something new. An interesting book to read and fascinating to discuss afterwards!"—Mark Lawrence

"Anna Smith Spark is a dynamic new voice in the field of grimly baroque fantasy, a knowing and witty provisioner of the Grand Guignol, a cheerful undertaker strolling across the graveyard and beckoning you to admire her newest additions."—Scott Lynch

"Gritty and glorious! A great read."—Miles Cameron, author of The Traitor Son Cycle

"Anna Smith Spark's debut The Court of Broken Knives is a fevered dream of a fantasy, set in a world where the saviors also seem to be the destroyers . . . . This book may not make you worship death like its characters do, but it weaves a spell that will consume you all the same."—B&N Sci-Fi & Fantasy Blog

"Anna Smith-Spark writes in a unique voice with such pace and veracity your imagination has to struggle to keep up with your eyes."—Adrian Collins, Grimdark Magazine

"Captivating."—Marc Turner, author of the Chronicles of the Exile series

"Holy crap, this is good!"—Grim Tidings

"All hail the queen of grimdark fantasy!"
—Michael R. Fletcher, author of Beyond Redemption

"Spark's gripping debut is definitely one to read and prize."—Publishers Weekly (starred review)

"Spark's first novel lives up to its billing as a 'grimdark' tale. The setting may be bleak and dreary, but the worldbuilding is well done and the characters fit right in. Troubled, solitary and downright drug-addled as the protagonist is, readers will come around to his side as the reasons why he seeks for the throne he lost are revealed."—RT Book Reviews

"This outstanding, unputdownable debut holds and horrifies like a blood-spattered tapestry. There's rough humour, high drama and a love of story-telling that shines through every page. Plus it's got dragons with bad breath. Brilliant."
—The Daily Mail (UK)

"Should appeal to grim dark fans looking for the extreme edge."
—Kirkus

Anna Smith Spark lives in London, UK. She loves grimdark and epic fantasy and historical military fiction. Anna has a BA in Classics, an MA in history and a PhD in English Literature. She has previously been published in the Fortean Times and the poetry website www.greatworks.org.
Loading...
or support indie stores by buying on
(This book is on backorder)