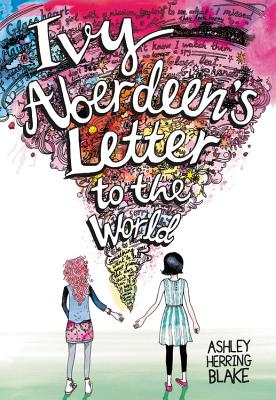 Ivy Aberdeen's Letter to the World

“Ivy Aberdeen has just suffered two huge losses: Her family's home has been destroyed by a tornado, and her secret notebook where she draws pictures of girls holding hands has vanished - only to reappear as pages left in her locker by a mysterious reader. It's not the best moment to get a crush on her new friend June, but Ivy perseveres through changing emotions and fears to figure out where she belongs in her world. Beautiful prose, characterization, and themes. Highly recommended!”
— Cecilia Cackley, East City Bookshop, Washington, DC
View the List

In the wake of a destructive tornado, one girl develops feelings for another in this stunning, tender novel about emerging identity, perfect for fans of The Thing About Jellyfish.

When a tornado rips through town, twelve-year-old Ivy Aberdeen's house is destroyed and her family of five is displaced. Ivy feels invisible and ignored in the aftermath of the storm--and what's worse, her notebook filled with secret drawings of girls holding hands has gone missing.

Mysteriously, Ivy's drawings begin to reappear in her locker with notes from someone telling her to open up about her identity. Ivy thinks--and hopes--that this someone might be her classmate, another girl for whom Ivy has begun to develop a crush. Will Ivy find the strength and courage to follow her true feelings?

Ivy Aberdeen's Letter to the World exquisitely enriches the rare category of female middle-grade characters who like girls--and children's literature at large.

Praise For Ivy Aberdeen's Letter to the World…

"Blake captures all the exhilaration of a first crush without shying away from Ivy's confusion....The sisters' relationship is one of the great rewards of this novel that includes a large and vivid cast of secondary characters, who give the story its sense of abundant texture."—The New York Times Book Review

"There are some books that we never forget. This is one of those books. Impactful, emotional, and important."—Erin Entrada Kelly, Newbery award-winning author of Hello, Universe

"A tenderhearted novel that should be in the hands of every reader."—Kat Yeh, author of The Truth About Twinkie Pie and The Way to Bea

"Ashley Herring Blake's novel captures the confusion, thrills and heartache of a first crush so perfectly that you will hold this book close to your heart."—Lisa Yee, author of the DC Super Hero Girls series

* "Filling a much-needed gap in middle grade literature, this story addresses not just the topic of a first crush, but also the invisibility frequently felt by middle children...Young readers will find Ivy's challenges very real and will sympathize with her choices, both good and bad."—School Library Journal, starred review

* "This is an emotionally sensitive and elegantly written novel about loss and the first stirrings of love."—Publishers Weekly, starred review

"This necessary and emotionally complex addition to the body of middle-grade literature offers readers a positive, complex, and courageous portrayal of burgeoning sexuality and relationships within the world of junior high."—Booklist

"Blake creates a sensitive portrayal of a preteen who's begun to figure herself out but isn't sure how she meshes with others, and of the bumbling and overstressed, but well-meaning, friends and family around her."—The Horn Book

Ashley Herring Blake lives in Nashville, Tennessee with her husband and two sons. She is the author of the young adult novel Suffer Love. Ivy Aberdeen's Letter to the World is her debut middle grade novel.
Loading...
or support indie stores by buying on