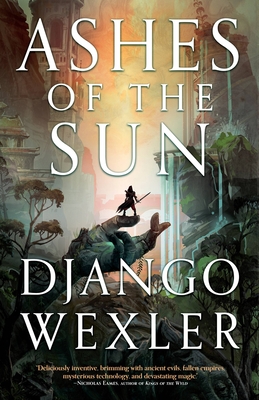 Ashes of the Sun (Burningblade & Silvereye #1)

"Ashes of the Sun is fantasy at its finest"--Nicholas Eames, author of Kings of the Wyld
Long ago, a magical war destroyed an empire, and a new one was built in its ashes. But still the old grudges simmer, and two siblings will fight on opposite sides to save their world in the start of Django Wexler's new epic fantasy trilogy.
Gyre hasn't seen his beloved sister since their parents sold her to the mysterious Twilight Order. Now, twelve years after her disappearance, Gyre's sole focus is revenge, and he's willing to risk anything and anyone to claim enough power to destroy the Order.
Chasing rumors of a fabled city protecting a powerful artifact, Gyre comes face-to-face with his lost sister. But she isn't who she once was. Trained to be a warrior, Maya wields magic for the Twilight Order's cause. Standing on opposite sides of a looming civil war, the two siblings will learn that not even the ties of blood will keep them from splitting the world in two.

Praise For Ashes of the Sun (Burningblade & Silvereye #1)…

"Ashes of the Sun is fantasy at its finest: deliciously inventive, brimming with ancient evils, fallen empires, mysterious technology, and devastating magic. Best of all, however, are its characters, each one crafted with deliberate care and developed in meaningful ways as their story unfolds."—Nicholas Eames, author of Kings of the Wyld

"Magic, mutants, and mayhem abound in Django Wexler's Ashes of the Sun, but there's also plenty of brain food to be had in this tale of a post-catastrophe world suffering under the yoke of unbending authoritarian rule. A fast-paced and highly entertaining ride through a compelling and original world"—Anthony Ryan, NYT bestselling author of Blood Song

"Reminiscent of Final Fantasy, Masters of the Universe, and Moorcock's The Jewel in the Skull, ASHES OF THE SUN is a science-fantasy adventure brimming with everything that is weird and wonderful about a world where magic and technology have fused in the fires of a fallen civilization."—Jonathan French, author of The Grey Bastards

"Ashes of the Sun shows that Wexler is a master of high fantasy. His plotting and this post-apocalyptic setting will warp your mind!"—S. M. Stirling, NYT bestselling author

"Gorgeous writing, powerfully-drawn characters, and an exciting storyline!"—K.D. Edwards, Author of The Last Sun and The Hanged Man

"Exciting. Immersive. Epic. A perfect page turner and a phenomenal start to a new series."—Peter Clines, author of The Fold and Ex-Heroes

"This is a book whose characters and world will stay with you well after the last page. Do yourself a favor and read it. Now."—Douglas Hulick, author of Among Thieves and Sworn in Steel

"Ashes of the Sun uses awesome worldbuilding and complex, diverse characters to fuse the aesthetics of Star Wars with the brainfeel of Fullmetal Alchemist. Ancient secrets! Queer ladies! Snark! I demand a TV adaptation ASAP!"—Foz Meadows

"Ashes of the Sun is the best sort of fantasy. With fascinating characters, a richly realized world, and romances both steamy and adorable, Gyre and Maya are epic heroes you'll want to know."—Robyn Bennis, author of The Guns Above

"Ashes of the Sun brings to life an ancient world of magic broken by war. It's a simmering post-apocalyptic fantasy that feels like the literary equivalent of a ticking time bomb. The book lights a fuse in its first few pages, slowly setting up stakes and a conflict big enough to break the bonds of love, loyalty, duty, and even family, all before the full burn of its last few chapters and the finale's thunderous explosion."—Evan Winter, author of The Rage of Dragons

"Django Wexler writes with a range and breadth seldom seen in fantasy. He pushes the envelope of what the genre can do, and readers are lucky for it."—Myke Cole, author of The Sixteenth Watch

Django Wexler graduated from Carnegie Mellon University in Pittsburgh with degrees in creative writing and computer science, and worked for the university in artificial intelligence research. Eventually he migrated to Microsoft in Seattle, where he now lives with two cats and a teetering mountain of books. When not writing, he wrangles computers, paints tiny soldiers, and plays games of all sorts.
Loading...
or support indie stores by buying on