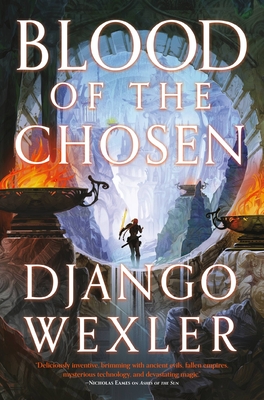 Blood of the Chosen (Burningblade & Silvereye #2)

In the second book of Django Wexler's epic fantasy trilogy about two siblings divided by magic and revolution, Gyre must travel across the Splinter Kingdoms to rally the rebels to his side, while his sister Maya uncovers the secrets of a powerful artifact that could change everything.

Gyre finally sees a way to overthrow the all-powerful Twilight Order. But he'll have to gain the alliance of both the ghouls and the human rebels to the south in order to even stand have a chance. And uniting them won't be so simple.

His sister Maya is still a soldier of the Order. But after clashing with her brother, she isn't so certain where her loyalties lie. Chasing the origins of a mysterious artifact to a long-lost library, she just might find the answers she's looking for.

"Fantasy at its finest." —Nicholas Eames, on Ashes of the Sun

Django Wexler graduated from Carnegie Mellon University in Pittsburgh with degrees in creative writing and computer science,  and worked for the university in artificial intelligence research. Eventually he migrated to Microsoft in Seattle, where he now lives with two cats and a teetering mountain of books.  When not writing, he wrangles computers, paints tiny soldiers, and plays games of all sorts.