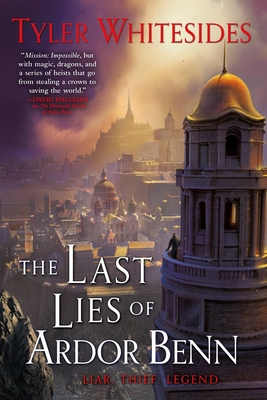 The Last Lies of Ardor Benn (Kingdom of Grit #3)

"Whitesides sticks the landing in his conclusion to the Kingdom of Grit trilogy" (Publishers Weekly). The final book in an action-packed epic fantasy series set in a world with dragon-fueled magic where master con artist Ardor Benn takes a job to steal a living dragon. Ardor Benn has taken his lies to a new level, infiltrating high society so he can steal a priceless resource. But now that he's on the inside, he finds himself poring through ancient texts, searching for answers to his deepest questions. He discovers something is coming. Something world-ending. Now, an old enemy is extorting him for one last job. Steal a live dragon. He doesn't know how, and he doesn't know why. But he's got a feeling that it's a job he has to take. Only problem is, Ard's running short on time and shorter on lies. And his personal ambitions are alienating all of his allies. With no one else to rely on, he'll have to trust the one person nobody else does: himself. Kingdom of Grit:The Thousand Deaths of Ardor BennThe Shattered Realm of Ardor BennThe Last Lies of Ardor Benn

"Whitesides sticks the landing in his conclusion to the Kingdom of Grit trilogy … Whitesides excels at balancing detailed worldbuilding and page-turning plot, sprinkling in plenty of humor along the way. This is a worthy finale to the series, and fans will be eager to see what he does next."—Publishers Weekly

“It’s a fun read with plenty of adventure, danger, and clever solutions to problems; ultimately a satisfying, if surprisingly tidy, end to the career of a self-proclaimed legendary criminal.”—Booklist

"Mission Impossible, but with magic, dragons, and a series of heists that go from stealing a crown to saving the world. A fun, terrific read I heartily recommend."—David Dalglish, author of A Dance of Cloaks, on The Thousand Deaths of Ardor Benn

"Ardor is a rogue with a heart of gold and his team is incredibly fun to follow, but we also love this one of the originality of its heist."—B&N Sci-Fi and Fantasy Blog on The Thousand Deaths of Ardor Benn

"I cannot recommend this book highly enough. It is easily the best fantasy-heist book I have read in years!"—A Fantastical Librarian on The Thousand Deaths of Ardor Benn

"The world of Ardor Benn is fascinating, deep, and well written ... This is a very impressive debut and Tyler Whitesides is clearly a talented writer with a lot of potential."—The Quill to Live on The Thousand Deaths of Ardor Benn

"A cracking introduction to a new fantasy world that demands further exploration."—SFX on The Thousand Deaths of Ardor Benn

When he's not writing, Tyler Whitesides enjoys playing percussion, hiking, fly fishing, cooking, and theater. Tyler is a bestselling children's author. He lives in the mountains of northern Utah with his wife and son.
Loading...
or
Not Currently Available for Direct Purchase