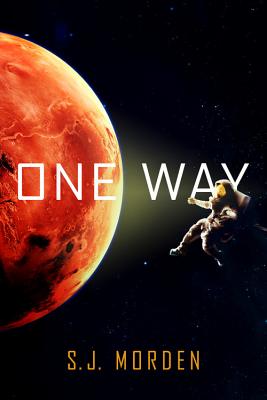 Stranded on Mars with seven other convicts, one man must fight for survival on a planet where everyone's a killer in this edge-of-your-seat science fiction thriller for fans of The Martian.

Former architect Frank Kittridge is serving life for murdering his son's drug dealer, so when he's offered a deal by the corporation that owns the prison -- he takes it. He's been selected to help build the first permanent base on Mars. Unfortunately, his crewmates are just as guilty of their crimes as he is.

As the convicts set to work on the frozen wastes of Mars, the accidents multiply.

Until Frank begins to suspect they might not be accidents at all . . .
Dr. S. J. Morden trained as a rocket scientist before becoming the author of razor-sharp, award-winning science fiction. Perfect for fans of Andy Weir's The Martian and Richard Morgan, One Way takes off like a rocket, pulling us along on a terrifying, epic ride with only one way out.

Praise For One Way…

"A stunning novel that mixes science, fiction and mystery into an exciting tale."
—RT Book Reviews

"Morden expertly melds the genres of science fiction and mystery in this whodunit set on Mars."
—Booklist

"Sharp thriller in a crisply imagined near future...Morden makes the science accessible as he steadily ratchets up the tension and paranoia, fully utilizing the starkly beautiful but utterly deadly setting."
—Publishers Weekly

"A provocative premise, with an interesting main character... Morden brings it together nicely in the last pages, setting up the premise for an exciting sequel."
—Los Angeles Times

Dr. S. J. Morden has won the Philip K. Dick Award and been a judge on the Arthur C. Clarke Award. He is a bona fide rocket scientist with degrees in Geology and Planetary Geophysics.
Loading...
or
Not Currently Available for Direct Purchase