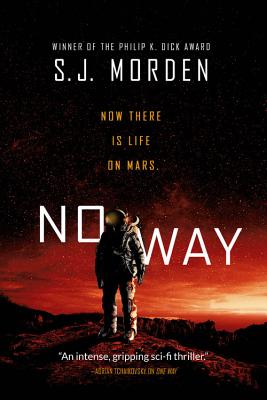 In the sequel to the terrifying science fiction thriller, One Way, returning home from Mars may mean striking a deal with the very people who abandoned him.

They were sent to build a utopia, but all they found on Mars was death.

Frank Kitteridge has been abandoned. But XO, the greedy -- and ultimately murderous -- corporate architects of humanity's first Mars base made a costly mistake when they left him there: they left him alive. Using his skills and his wits, he's going to find a way back home even if it kills him.

Little does he know that Mars isn't completely empty. Just over the mountain, there's another XO base where things are going terribly, catastrophically wrong. And when the survivors of that mission find Frank, they're going to want to take even the little he has away from him.

If there's anything in Frank's favor, it's this: he's always been prepared to go to the extremes to get the job done. That's how he ended up on Mars in the first place. It just might be his ticket back.

For more from S. J. Morden, check out:
One Way

Praise For No Way…

"A stunning novel that mixes science, fiction and mystery into an exciting tale."—RT Book Reviews on One Way

"Morden expertly melds the genres of science fiction and mystery in this whodunit set on Mars."—Booklist on One Way

"Sharp thriller in a crisply imagined near future...Morden makes the science accessible as he steadily ratchets up the tension and paranoia, fully utilizing the starkly beautiful but utterly deadly setting."—Publishers Weekly on One Way

"A provocative premise, with an interesting main character... Morden brings it together nicely in the last pages, setting up the premise for an exciting sequel."—Los Angeles Times on One Way

Dr. S. J. Morden has won the Philip K. Dick Award and been a judge on the Arthur C. Clarke Award. He is a bona fide rocket scientist with degrees in Geology and Planetary Geophysics.
Loading...
or support indie stores by buying on