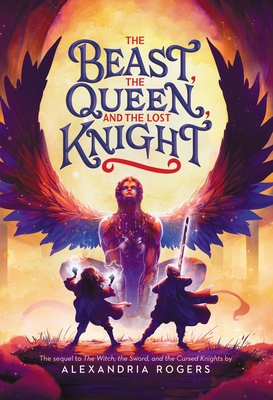 The Beast, the Queen, and the Lost Knight

The thrilling sequel to the Barnes & Noble Book Awards Finalist, The Witch, the Sword, and the Cursed Knights which takes readers even deeper into the legend of Camelot!

Best friends Ellie Bettlebump and Caedmon Tuggle are different as the day is long. Caedmon’s a human, from a non-magical realm known as Wisconsin. Ellie, on the other hand, is full of magic—illegal magic. What they have in common is far more important, however. After the adventure of a lifetime, they are both officially Knights of the Round Table…in training. To graduate to the next level at the Knights Academy, they must complete three quests proving their heroism. If they fail, they’ll have to achieve the dreaded Impossible Quest, and repeat the same year forever.

Unfortunately, their quests prove more than a little difficult. Ellie is exposed as a witch and her magic is locked away by the powerful DeJoie family. In an effort to free herself from their control, Ellie winds up embroiled in a plan that could ruin the Knights of the Round Table: steal the source of the knights' power, and a wicked sorcerer will restore her magic.

As fate would have it, one of Caedmon's quests leads him to protect the source of the knights' power. If Caedmon wants to graduate--not to mention save the realms from certain disaster --he'll have to betray his best friend, forcing him to choose what truly matters most to him: knighthood or friendship.

As centuries of secrets collide and an ancient evil arises, Ellie and Caedmon must overcome this test of loyalty and friendship. If they don't, they will lose more than their battle against evil forces keeping them apart.

They will lose each other.

Alexandria Rogers received her BA in creative writing at Miami University and her MA in creative non-fiction writing at City, University of London. She's now an editor and writer based in Los Angeles.
Loading...
or support indie stores by buying on