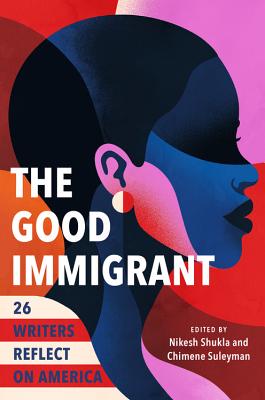 By turns heartbreaking and hilarious, troubling and uplifting, these "electric" essays come together to create a provocative, conversation-sparking, multivocal portrait of modern America (The Washington Post).
From Trump's proposed border wall and travel ban to the marching of white supremacists in Charlottesville, America is consumed by tensions over immigration and the question of which bodies are welcome. In this much-anticipated follow-up to the bestselling UK edition, hailed by Zadie Smith as "lively and vital," editors Nikesh Shukla and Chimene Suleyman hand the microphone to an incredible range of writers whose humanity and right to be here is under attack.

These writers, and the many others in this urgent collection, share powerful personal stories of living between cultures and languages while struggling to figure out who they are and where they belong.

Praise For The Good Immigrant: 26 Writers Reflect on America…

"This collection is a resounding success on multiple fronts. Its
righteous rage is perfectly matched by its literary rewards...a surround-sound
chorus that bristles with an unpredictable, electric energy...Each essay is a tantalizing introduction -- and invitation
-- to the larger body of work these artists have already created and will
continue to make long after this moment passes. What unites this defiant chorus
of immigrant voices is best expressed in this variation on an enduring line by
Langston Hughes: 'We, too sing America.'"—The Washington Post

"The strength of this collection is in its
diversity-of gender, sexuality, privilege, experience, and writing style. A
gift for anyone who understands or wants to learn about the breadth of
experience among immigrants to the U.S., this collection showcases the joy,
empathy, and fierceness needed to adopt the country as one's own."—PublishersWeekly (Starred Review)

"This book does what books can do better than
other media: it devotes space to the shadowy ranges, to the subjects that are
not easily graspable - the ineffable, varied, certainly never simple
experiences of being an immigrant."—Rachel Khong, The Guardian

"There
are no weak links in this well-curated book."—Kirkus Reviews

"Extraordinary in its attempt to make sense of the current moment...devastating in its ability to coalesce the lived realities of nonwhite Americans and the impact of these acts...Since narratives operate as engines of empathy, granting access to worlds and experiences often overlooked, The Good Immigrant helps counter some of today's more toxic narratives. Hopefully we'll read more of these kind of stories in the future."—Los Angeles Review of Books

"This volume brings together an amazing group
of writers...who describe their personal experiences and struggles with finding
their place in the U.S. The pieces connect first-person stories with broader
cultural and political issues to paint an important picture of the U.S. today."—BookRiot

"Immigration has become a hot-button issue in America for all the wrong reasons (see: racists), and The Good Immigrant is the perfect antidote to all the hate. Through essays from first- and second-generation immigrants like Jenny Zhang, Chigozie Obioma, Fatimah Asghar, and more, you'll get a whole new perspective on everything from '90s fashion to Uber drivers."—PopSugar

Praise for The Good Immigrant (UK):
"The Good Immigrant is a lively and vital intervention into the British cultural conversation around race. Instead of statistics and dogma we find real human experience and impassioned argument - and it's funny and moving, too."
—Zadie Smith

"An act of peaceful defiance; as a document of the now, and as an opportunity to educate ourselves about the lives and experiences of others."—Guardian

"The Good Immigrant is that rarest of beasts, a truly necessary book."—Jonathan Coe, Observer

"As engaging as it is necessary, especially in today's political climate."—Paste

"A timely and important read, filled with
gorgeous writing."—Woman's Day

Nikesh Shukla is a British writer and diversity activist who conceived and edited The Good Immigrant, the acclaimed collection of essays about race and immigration by 21 writers of color. He is the editor of Rife Magazine, an online magazine for young people, and the author of the novels Coconut Unlimited, which was shortlisted for the Costa First Novel Award, and Meatspace. He has also been shortlisted for the Liberty Human Rights Arts Award and named as one of Foreign Policy's 100 Global Thinkers 2016. His third novel The One Who Wrote Destiny and his first YA novel will be published in 2018.
Chimene Suleyman is a writer from London who is now based in New York. As well as contributing to The Good Immigrant she has written on race-politics for The Independent, International Business Times, The Debrief, The Pool, and Media Diversified. TV and radio appearances include BBC Newsnight, BBC, and LBC. Her poetry collection, Outside Looking On, was included in the Guardian's Best Books of 2014 list.