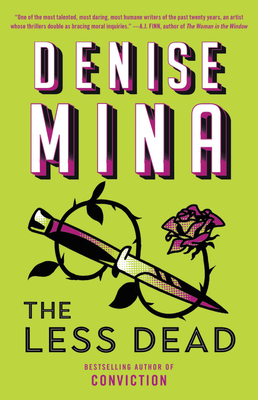 In this shocking new thriller from the author of the "blazingly intense" Reese Witherspoon book club pick and national bestseller Conviction, a woman in crisis finds herself on the hunt for her own mother's murderer (A. J. Finn).

She thought she was finding her birth mother.
Now she's searching for a killer.

Dr. Margo Dunlop is at a crossroads. Her adoptive mom just passed away, and Margo misses her so much she can't begin to empty the house-or, it seems, get her brother on the phone. Not to mention she's newly single, secretly pregnant, and worried about her best friend's dangerous relationship. In an effort to cheer herself up she goes in search of her birth mother. Instead she finds Nikki, her mother's sister. Aunt Nikki isn't what Margo expects, and she brings upsetting news: Margo's mother is dead. Worse, she was murdered years ago, and her killer is still at large-and sending Nikki threatening letters.

Margo is torn. Should she stay out of this mess, or try to find justice? But then Margo receives a letter, too. Someone out there has been waiting and watching, and in Margo sees the spitting image of her mother...

Darkly funny and deeply affecting, The Less Dead is a sharply modern new thriller from the bestselling author of Conviction, and a surprisingly moving story of daughters and mothers, secrets and choices, and how the search for the truth-and a long-hidden killer-will lead one woman to find herself.


Praise For The Less Dead…

“Riveting . . . Mina is matchless at building suspicion and creeping dread. A bold and bracing twist on the fallen-woman-as-victim story.”
—Kirkus Reviews

“The Less Dead is at once a gripping thriller and an examination, and vindication, of a group of women who are often faceless, unsympathetic victims.”
—BookPage

"The
menacing atmosphere . . . effectively supports the novel's themes of
reconciliation, class divides, and violence against women. Mina is a master
of the genre, with wide appeal, especially for those who appreciate
character-driven stories with literary weight, like those of Tana
French, Karin Slaughter, and Laura Lippman."

“As the plot gains speed to a startling and abrupt end, readers will be left agasp and wanting more."
—Library Journal

"The Less Dead isn't a typical thriller. At its heart, this is a story of mothers and daughters, and the ties that bind them.”
—PopSugar

"One of the most talented, most daring, most humane writers of the past twenty years."
—A.J. Finn, author of The Woman in the Window

"If you haven't read Denise Mina yet, you should."
—Alafair Burke, New York Times bestselling author of The Better Sister

"Denise Mina brilliantly manages to be funny, heart-wrenching, gut-punching and addictive all at once."
—Nicci French, author of the international betseller Day of the Dead

Denise Mina is the author of fourteen novels, including Conviction and The Long Drop, winner of the 2017 McIlvanney Prize for Scottish crime book of the year, and the Garnethill trilogy, the first installment of which won the John Creasey Memorial Award for best first crime novel. Mina has twice received the Theakstons Old Peculier Crime Novel of the Year Award. She lives in Glasgow.
Loading...
or support indie stores by buying on