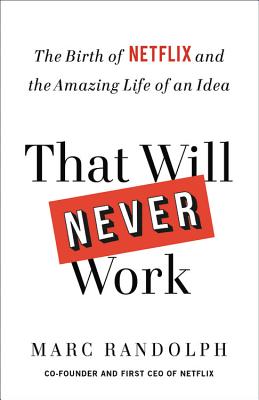 
Praise For That Will Never Work: The Birth of Netflix and the Amazing Life of an Idea…

"Netflix was built on the vision and creative DNA of one man-Marc Randolph. As the founding CEO, his leadership defined the culture of Netflix and laid the groundwork for successive, global revolutions in how we make and consume entertainment. His willingness to step aside so that his co-founder Reed Hastings could scale up the company stands as an example of humility and self-knowledge that is rare in the startup world." GinaKeating, author of Netflixed: TheEpic Battle for America's Eyeballs

"Marc is an unusually bravesoul. Marc's genius in recognizing that not knowing frees you to experiment andobserve and to ultimately win."Lloyd Tabb, founder ofLooker

"Marc wastes no time cuttingthrough the noise and identifying the truth. Every moment I have spent withMarc, whether it was as he formulated and launched Netflix or since then, hasbeen truly rewarding. Marc understands what is important whether it is yourproduct, your marketing, or your business plan. A remarkable and one of a kindvisionary."Mitch Lowe, founder ofRedBox and CEO of MoviePass

Marc Randolph is the co-founder of Netflix, serving as their founding CEO, the executive producer of their website, and a member of their board of directors until his retirement in 2004. Although best known for starting Netflix, Marc's career as Silicon Valley entrepreneur spans more than four decades. He's founded or co-founded more than half a dozen other successful start-ups, mentored rising entrepreneurs, and invested in numerous successful tech ventures. He speaks frequently to companies and at industry events nationally and internationally. He lives in Santa Cruz, California.