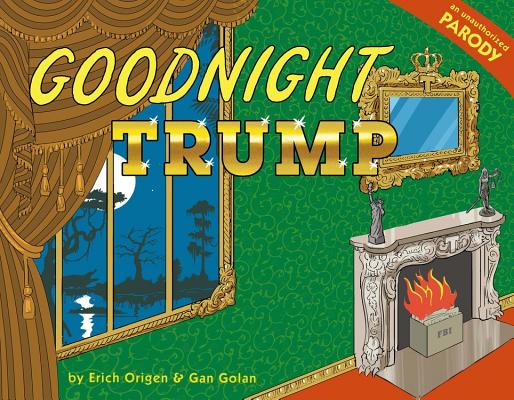 Say goodnight to America's manchild-in-chief with this bestselling and wickedly funny parody.

In the very classy room

There was a golden mirror

And a silver spoon

And a broadcast of --

A half-baked story from a fake newsroom . . .

Goodnight Trump opens in the very classy golden bedroom of the White House, where it is bedtime for the 45th President of the United States. Readers can encourage this very stable genius to bid goodnight to some of his favorite treasures: a drawer overflowing with subpoenas, a Russian nesting doll that opens page by page to reveal a secret message, a thriving swamp just outside his window, and much more.

Turn out the lights on Trump's America with this hilarious yet poignant call to action.

Praise For Goodnight Trump: A Parody…

"Less as an exhalation and more like a spell to soothe the fried nerves of the frazzled left... a litany of accusations against the president's crimes against humanity and taste, juxtaposed for maximum horror and revulsion. There are sick burns, too, though it's not likely the president would receive them as such."
—Salon

Erich Origen and Gan Golan are the New York Times bestselling authors and illustrators of Goodnight Trump, Goodnight Bush, The Adventures of Unemployed Man, and Don't Let the Republican Drive the Bus.
Loading...
or support indie stores by buying on