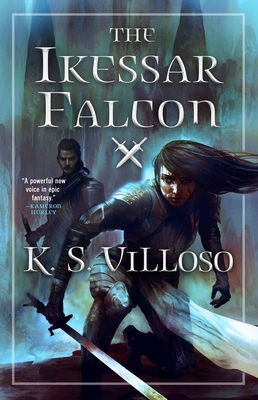 The Ikessar Falcon (Chronicles of the Wolf Queen #2)

"Intricate, intimate, and intensely plotted." - Nicholas Eames on The Wolf of Oren-yaro

"The Ikessar Falcon retains the excellent characterization and intrigue of The Wolf of Oren-yaro while expanding both its world and the plot at a head-spinning rate. It does everything the middle book of a trilogy should with an uncommon degree of authorial skill, and is a thoroughly entertaining read in its own right."―BookPage

The stunning sequel to The Wolf of Oren-yaro where the queen of a divided land struggles to unite her people. Even if they despise her. K. S. Villoso is a "powerful new voice in fantasy." (Kameron Hurley) The spiral to madness begins with a single push. Abandoned by her people, Queen Talyien's quest takes a turn for the worst as she stumbles upon a plot deeper and more sinister than she could have ever imagined, one that will displace her king and see her son dead. The road home beckons, strewn with a tangled web of deceit and impossible horrors that unearth the nation's true troubles - creatures from the dark, mad dragons, and men with hearts hungry for power. To save her land, Talyien must confront the myth others have built around her: Warlord Yeshin's daughter, symbol of peace, warrior and queen, and everything she could never be. The price of failure is steep. Her friends are few. And a nation carved by a murderer can only be destined for war. The Chronicles of the Wolf QueenThe Wolf of Oren-yaroThe Ikessar Falcon
The Dragon of Jin-Sayeng

Praise For The Ikessar Falcon (Chronicles of the Wolf Queen #2)…

"The power plays are woven tightly into the action, as Villoso broadens her worldbuilding and adds some surprising twists ... A must for epic fantasy readers."—Library Journal (starred review)

"The Ikessar Falcon retains the excellent characterization and intrigue of The Wolf of Oren-Yaro while expanding both its world and the plot at a head-spinning rate. It does everything the middle book of a trilogy should with an uncommon degree of authorial skill, and is a thoroughly entertaining read in its own right."—BookPage

"Villoso crafts believable, complex characters and spices up the politics with dragons and magic. Fantasy readers will enjoy this intricate epic and be pleased by the broadening scope of the series."—Publishers Weekly