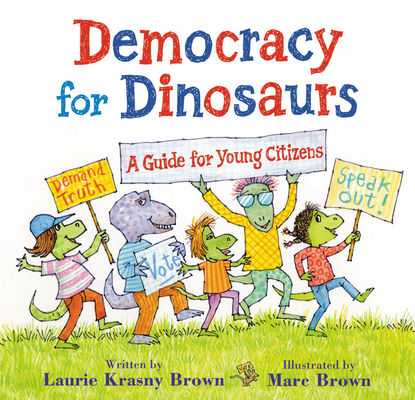 From the bestselling, trusted team behind the Dino Tales: Life Guides for Families series comes this introductory guide that encourages young readers to become engaged citizens of the world.
This essential, kid-friendly nonfiction guide isn't just for families looking to share genuinely patriotic values during an election year -- it's for everyone. Using accessible dinosaur characters and clear language, Democracy for Dinosaurs explores key civic values on every adult's mind and helps showyoung readers how the things they do every single day can be guided by principles we must share in a democratic society: freedom, fairness, the rule of law, equality, respect for free speech, and respect for the truth. By modeling accessible ways to practice being a good citizen, children will understand they are part of their country and that they have an important role to play.
Other Dino Tales: Life Guides for FamiliesHow to Be a FriendDinosaurs DivorceWhen Dinosaurs Die

Praise For Democracy for Dinosaurs: A Guide for Young Citizens (Dino Tales: Life Guides for Families)…

Praise for How to Be a Friend:"Will be very useful to parents, teachers, and other caregivers of young children--on a daily, if not hourly, basis."---The Horn Book


"The approachable illustrations implement cheery comics panels featuring anthropomorphized dinosaurs in a variety of relatable scenarios to explain fairness and its relationships to rules and laws, voting as a means of choosing and expressing individual opinions, and the tricky differences between truth, opinion, and belief."—Booklist

"The inviting second-person text speaks directly to 'kid citizens', encouraging them to view themselves as participants in our government...This optimistic and accessible guide to civic responsibility concludes with the charge to 'Stand Up for Democracy' -- a message now more important than ever."—Horn Book

Laurie Krasny Brown is a fine artist as well as an author, parent, and educator with a master's degree from Teachers College, Columbia University and a doctorate in human development from Harvard University. She has written many books for children, including the popular Dino Tales: Life Guides for Families series, which has sold over 1.5 million copies to date.
Marc Brown is the creator of the bestselling Arthur Adventure book series and executive producer of the children's PBS television series Arthur. Laurie and Marc live in New York City and Tisbury, Massachusetts.
Loading...
or support indie stores by buying on