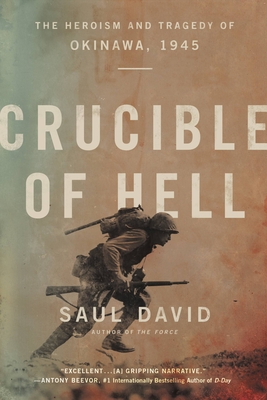 The Heroism and Tragedy of Okinawa, 1945

From the award-winning historian, Saul David, the riveting narrative of the heroic US troops, bonded by the brotherhood and sacrifice of war, who overcame enormous casualties to pull off the toughest invasion of WWII's Pacific Theater -- and the Japanese forces who fought with tragic desperation to stop them.

With Allied forces sweeping across Europe and into Germany in the spring of 1945, one enormous challenge threatened to derail America's audacious drive to win the world back from the Nazis: Japan, the empire that had extended its reach southward across the Pacific and was renowned for the fanaticism and brutality of its fighters, who refused to surrender, even when faced with insurmountable odds. Taking down Japan would require an unrelenting attack to break its national spirit, and launching such an attack on the island empire meant building an operations base just off its shores on the island of Okinawa.

The amphibious operation to capture Okinawa was the largest of the Pacific War and the greatest air-land-sea battle in history, mobilizing 183,000 troops from Seattle, Leyte in the Philippines, and ports around the world. The campaign lasted for 83 blood-soaked days, as the fighting plumbed depths of savagery. One veteran, struggling to make sense of what he had witnessed, referred to the fighting as the "crucible of Hell." Okinawan civilians died in the tens of thousands: some were mistaken for soldiers by American troops; but as the US Marines spearheading the invasion drove further onto the island and Japanese defeat seemed inevitable, many more civilians took their own lives, some even murdering their own families. In just under three months, the world had changed irrevocably: President Franklin D. Roosevelt died; the war in Europe ended; America's appetite for an invasion of Japan had waned, spurring President Truman to use other means -- ultimately atomic bombs -- to end the war; and more than 250,000 servicemen and civilians on or near the island of Okinawa had lost their lives.

Drawing on archival research in the US, Japan, and the UK, and the original accounts of those who survived, Crucible of Hell tells the vivid, heart-rending story of the battle that changed not just the course of WWII, but the course of war, forever.

Praise For Crucible of Hell: The Heroism and Tragedy of Okinawa, 1945…

Praise for Crucible of Hell:


"[Saul David] is peerless now among our military historians... [A] superb book...that often reads like a screenplay, but depicts suffering that was all too real."—Telegraph

"Gripping, even gruesome, yet deeply moving, Crucible of Hell sweeps us masterfully from a coral charnel house in the Pacific to the mushroom cloud over Hiroshima."—David Reynolds, author of In Command of History and The Long Shadow

"Vivid and deeply moving, Crucible of Hell paints a rich portrait of one of the most horrific battles in modern memory. David masterfully evokes the desperation and courage of soldiers, civilians, and commanders on both sides, constantly switching perspectives to capture the deep story of Okinawa's horror. Hard to put down, harder to forget."
—Stephan Talty, author of Saving Bravo: The Greatest Rescue Mission in Navy SEAL History

"David restores a human dimension to this battle - both sides are brave, stoic, frightened, barbaric and occasionally cowardly. This is narrative history at its most visceral as battles unfold almost in real time... In short chapters David shifts between American and Japanese fronts, providing a gripping reconstruction of the action."—The Times (UK)

"Superbly researched, well-written...Reminds us that the defining characteristic of war is the mass destruction of individuals, both physically and psychologically."—The Spectator

"A worthy addition to the literature of the Okinawa campaign."—Wall Street Journal

Praise for Saul David's The Force:

"With impeccable research and a keen eye for detail, Saul David has brought to life the surprising story of the original band of brothers. You can draw a vivid line from the make-or-break WWII battles of these daring soldiers to today's US Army Special Forces...Saul David does us -- and history -- a service by dramatizing how and why that 'tip of the spear' was forged. These brave citizen-soldiers did the impossible, and The Forcehonors their brotherhood, triumph, and ultimate sacrifices. An essential part of anyone's library."—Doug Stanton, #1 New York Timesbestselling author of Horse Soldiers and In Harm's Way

"This remarkable story of the most unique special operations unit in Allied service during World War II throws you into battle during the meat grinder campaign in Italy, where the men of the Force displayed exceptional loyalty to each other and courage under fire all while undertaking some of the most difficult missions of the war. Told at soldier's-eye level, The Force is a gripping and awe-inspiring account of a storied unit and a legendary battle."—John R. Bruning, bestselling author of Race of Aces and Indestructible

"With this riveting story of an unlikely group of men becoming elite soldiers and contributing to the Allied victory, Saul David brings us a superb tale, well told."—Gregory A. Freeman, bestselling author of The Forgotten 500

"The First Special Service Force created in 1942 was a unique elite unit...As Saul David makes clear in this stirring account of their heroics, they did much more than their share and established precedents for the U.S. and Canadian Special Forces of today."—James M. McPherson, Pulitzer Prize-winning author of The Battle-Cry of Freedom

"Compelling and well-researched, The Force is an uplifting story of bravery, duty, and honor, an account of men who found the courage to take on an impossible mission -- and prevail against all odds."—Howard Blum, New York Timesbestselling author of Dark Invasion and The Last Goodnight

Saul David is a military historian and broadcaster. He is the author of The Indian Mutiny, which was shortlisted for the Duke of Westminster's Medal for Military Literature, Military Blunders, Zulu: the Heroism and Tragedy of the Zulu War of 1879 (a Waterstone's Military History Book of the Year),Victoria's Wars, and Operation Thunderbolt: Flight 139 and the Raid on Entebbe Airport, the Most Audacious Hostage Rescue Mission in History, an Amazon History Book of the Year. He lives outside of Bath, England, where he is a professor of military history at the University of Buckingham.
Loading...
or support indie stores by buying on
(This book is on backorder)