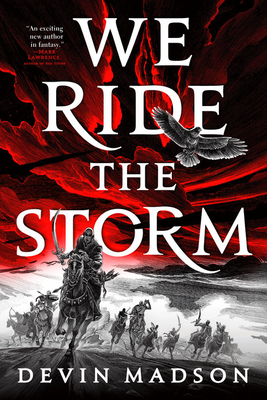 We Ride the Storm (The Reborn Empire #1)

"A complex tale of war, politics, and lust for power." —The Guardian

War built the Kisian Empire. War will tear it down.

Seventeen years after rebels stormed the streets, factions divide Kisia. Only the firm hand of the god-emperor holds the empire together. But when an unexpected betrayal destroys a tense alliance with neighboring Chiltae, all that has been won comes crashing down.

In Kisia, Princess Miko Ts'ai is a prisoner in her own castle. She dreams of claiming her empire, but the path to power could rip it, and her family, asunder.

In Chiltae, assassin Cassandra Marius is plagued by the voices of the dead. Desperate, she accepts a contract that promises to reward her with a cure if she helps an empire fall.

And on the border between nations, Captain Rah e'Torin and his warriors are exiles forced to fight in a foreign war or die.

As an empire dies, three warriors will rise. They will have to ride the storm or drown in its blood.

We Ride the Storm is the epic launch of a bold and brutal fantasy series, perfect for readers of Mark Lawrence, John Gwynne, and Brian Staveley.

Praise for The Reborn Empire:

"Imaginative worldbuilding, a pace that builds perfectly to a heart-pounding finale and captivating characters. Highly recommended." —John Gwynne, author of The Shadow of the Gods

For more from Devin Madson, check out:

Praise For We Ride the Storm (The Reborn Empire #1)…

"A tale that hits all the right spots. Imaginative world building, a pace that builds perfectly to a heart-pounding finale and captivating characters. There's a lot to love here. Highly recommended."—John Gwynne, author of The Faithful and the Fallen series

"Intricate, compelling and vividly imagined, this is the first in a new quartet that I am hugely excited about. Visceral battles, complex politics and fascinating worldbuilding bring Devin's words to life."—Anna Stephens, author of Godblind

"Fans of George R. R. Martin's Song of Ice and Fire series will appreciate the feudal political maneuvering, shifting alliances, and visceral descriptions of combat and its aftermath in this series starter."—Booklist

"An utterly arresting debut,Storm's heart is in its complex, fascinating characters, each trapped in ever tightening snarls of war, politics and magic. Madson's sharp, engaging prose hauls you through an engrossing story that will leave you wishing you'd set aside enough time to read this all in one sitting. One of the best new voices in fantasy."—Sam Hawke, author of City of Lies

"A complex tale of war, politics and lust for power."—The Guardian

"A brutal, nonstop ride through an empire built upon violence and lies, a story as gripping as it is unpredictable. Never shying away from the consequences of the past nor its terrible realities, Madson balances characters you want to love with actions you want to hate while mixing in a delightful amount of magic, political intrigue, and lore. This is not a book you'll be able to put down."—K. A. Doore, author of The Perfect Assassin