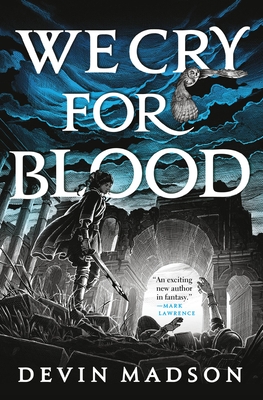 We Cry for Blood (The Reborn Empire #3)

The empire has fallen and another rises in its place in the action-packed third book of Devin Madson's bold and bloody epic fantasy quartet.

Ambition and schemes have left the Kisian Empire in ashes. Empress Miko Ts’ai will have to move fast if she hopes to secure a foothold in its ruins. However, the line between enemies and allies may not be as clear-cut as it first appeared.

After failing to win back his Swords, former Captain Rah e’Torin finds shelter among the Levanti deserters. But his presence in the camp threatens to fracture the group, putting him on a collision course with their enigmatic leader.

Assassin Cassandra Marius knows Leo Villius’s secret—one that could thwart his ambitions to conquer Kisia. But her time in Empress Hana’s body is running out and each attempt they make to exploit Leo’s weakness may be playing into his plans.

And, as Leo’s control over the Levanti emperor grows, Dishiva e’Jaroven is caught in his web. To successfully challenge him, she’ll have to decide how many of her people are worth sacrificing in order to win. We Cry for Blood is the thrilling continuation of a heart-pounding epic fantasy series, perfect for readers of Mark Lawrence, John Gwynne, and Brian Staveley.
Praise for The Reborn Empire:

"Imaginative worldbuilding, a pace that builds perfectly to a heart-pounding finale and captivating characters. Highly recommended." —John Gwynne, author of The Faithful and the Fallen

"A complex tale of war, politics, and lust for power." —The Guardian
The Reborn EmpireWe Ride the StormWe Lie with DeathWe Cry for Blood For more from Devin Madson, check out: The Vengeance TrilogyThe Blood of WhisperersThe Gods of ViceThe Grave at Storm's End


Praise For We Cry for Blood (The Reborn Empire #3)…

"A tale that hits all the right spots. Imaginative world building, a pace that builds perfectly to a heart-pounding finale and captivating characters. There's a lot to love here. Highly recommended."—John Gwynne, author of The Faithful and the Fallen series on We Ride the Storm

"A complex tale of war, politics and lust for power."—The Guardian on We Ride the Storm

"Intricate, compelling and vividly imagined, this is the first in a new quartet that I am hugely excited about. Visceral battles, complex politics and fascinating worldbuilding bring Devin's words to life."—Anna Stephens, author of Godblind on We Ride the Storm

"Fans of George R. R. Martin's Song of Ice and Fire series will appreciate the feudal political maneuvering, shifting alliances, and visceral descriptions of combat and its aftermath in this series starter."—Booklist on We Ride the Storm

"An utterly arresting debut,Storm's heart is in its complex, fascinating characters, each trapped in ever tightening snarls of war, politics and magic. Madson's sharp, engaging prose hauls you through an engrossing story that will leave you wishing you'd set aside enough time to read this all in one sitting. One of the best new voices in fantasy."—Sam Hawke, author of City of Lies on We Ride the Storm

"A brutal, nonstop ride through an empire built upon violence and lies, a story as gripping as it is unpredictable. Never shying away from the consequences of the past nor its terrible realities, Madson balances characters you want to love with actions you want to hate while mixing in a delightful amount of magic, political intrigue, and lore. This is not a book you'll be able to put down."—K. A. Doore, author of The Perfect Assassin on We Ride the Storm