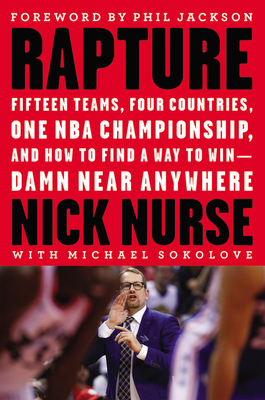 Fifteen Teams, Four Countries, One NBA Championship, and How to Find a Way to Win -- Damn Near Anywhere

Nick Nurse distills the wisdom, insight, and experiences that helped him lead the Toronto Raptors to the NBA championship in his first year as head coach. Foreword by Phil Jackson.
NBA fans had modest expectations for rookie coach Nick Nurse and his Toronto Raptors. But what those naysayers didn't realize was that Nurse had spent the past thirty years proving himself at every level of the game, from youth programs and college ball to the NBA D League and Britain's struggling pro circuit. While few coaches have taken such a circuitous path to pro basketball's promised land, the journey-which began at Kuemper Catholic high school in Carroll, Iowa-forged a coach who proved to be as unshakable as he is personable.

On the road, he is known to bring his guitar and keyboard for late-night jazz and blues sessions. In the locker room, he's steadfast and even-keeled regardless of the score. On the court, he pulls out old-school tactics with astounding success. A rookie in name but a veteran in attitude, Nurse is seemingly above the chaos of the game and, with only two seasons on his résumé, has already established himself as one of the NBA's most admired head coaches.

Now, in this revealing new book-equal parts personal memoir, leadership mani­festo, and philosophical meditation-Nurse tells his own story. Given unprecedented access inside the Raptors' locker room, readers get an intimate study of not only the team culture he has built, but also of a rookie coach's unique dynamic with the star players-such as Kawhi Leonard, Kyle Low­ry, and Pascal Siakam-who helped trail­blaze the 2019 championship run. As much for readers of Ray Dalio as for fans of John Wooden and Pat Summitt, Rapture promis­es to be a necessary read for anyone looking to forge their own path to success.


Praise For Rapture: Fifteen Teams, Four Countries, One NBA Championship, and How to Find a Way to Win -- Damn Near Anywhere…

“When the Toronto Raptors clinched our country’s first NBA Championship in the spring of 2019, they created a once-in-a-lifetime moment that brought Canadians together. Through Coach Nick’s leadership and vision, this hard-fought victory brought us to our feet, inspired heroes and role models for our children, and united us all. The Raptors are truly Canada’s team – and we’re proud of the exceptional role Coach Nick plays.”—The Right Honourable Justin Trudeau, Prime Minister of Canada

“There’s plenty in this book for everyone. Whether you’re a coach, player or just a curious person, Nick’s journey reveals many lessons in the pursuit of personal growth and excellence – and the benefits that accrue to those willing to bet on themselves.”—Steve Nash, eight-time NBA All-Star

“Nick Nurse didn’t just work his way to the top. He lead his way to the top. He’s won everywhere he’s been as a coach for a reason. His leadership, story and principles will encourage and empower you. This book is a must read!”—Jon Gordon, bestselling author of The Power of Positive Leadership

"An engaging account for fans of the Toronto Raptors or for readers who also enjoyed Phil Jackson’s Eleven Rings."—Library Journal

This inspiring take on turning a dream into a dream job is pure joy for basketball fans. —Publishers Weekly

"The true story of a basketball coach taking the long, often difficult road to the NBA."—Kirkus

Nick Nurse, born and raised in Carroll, Iowa, is an American basketball coach and is currently coaching the Toronto Raptors in the NBA.

Michael Sokolove is a longtime contributing writer for the New York Times Magazine and the author of seven previous books.