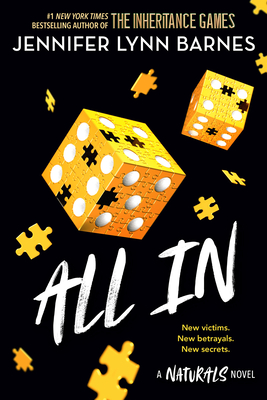 After a string of brutal murders in Las Vegas, Cassie Hobbes and the Naturals are called in to investigate. But even with the team's unique profiling talents, these murders seem baffling: unlike many serial killers, this one uses different methods every time. All of the victims were killed in public, yet the killer does not show up on any security feed. And each victim has a string of numbers tattooed on their wrist. Hidden in the numbers is a code -- and the closer the Naturals come to unraveling the mystery, the more perilous the case becomes.

Meanwhile, Cassie is dealing with an equally dangerous and much more painful mystery. For the first time in years, there's been a break in her mother's case. As personal issues and tensions between the team mount, Cassie and the Naturals will be faced with impossible odds -- and impossible choices.

With lives and love on the line, the stakes couldn’t be higher in this fast-paced, thrilling novel from the #1 bestselling author of The Inheritance Games, perfect for fans of A Good Girl’s Guide to Murder and One of Us Is Lying.

Praise for The Naturals:

"The Naturals is Criminal Minds for the YA world, and I loved every page." —New York Times bestselling author Ally Carter

* "[A] tightly paced suspense novel that will keep readers up until the wee hours to finish." —VOYA, starred review

"It's a stay-up-late-to-finish kind of book, and it doesn't disappoint." —Publishers Weekly

"In this high-adrenaline series opener...even a psychic won't anticipate all the twists and turns." —Booklist

Jennifer Lynn Barnes is the #1 New York Times bestselling author of more than twenty acclaimed young adult novels, including The Inheritance Games trilogy, Little White Lies, Deadly Little Scandals, The Lovely and the Lost, and The Naturals series: The Naturals, Killer Instinct, All In, Bad Blood, and the e-novella, Twelve. Jen is also a Fulbright Scholar with advanced degrees in psychology, psychiatry, and cognitive science. She received her Ph.D. from Yale University in 2012 and was a professor of psychology and professional writing at the University of Oklahoma for many years. She invites you to her online at www.jenniferlynnbarnes.com or follow her on Twitter @jenlynnbarnes.
Loading...
or support indie stores by buying on