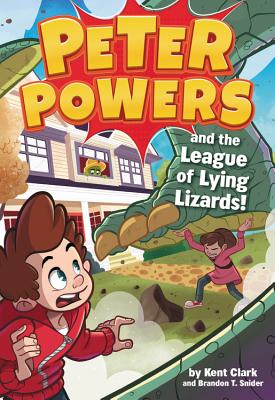 Peter Powers and the League of Lying Lizards!

Everyone in Peter Power's family has super awesome superpowers--except Peter. All he can do is make ice cubes and freeze stuff. But when Peter fibs to his teacher, the lies begin to snowball. Before he has time to tell the truth, Boulder City encounters earthquakes and a friendly group of lizard people!

But soon, the lizard people reveal their lying colors and take over the town. Now, it's up to Peter and his super-powered family to save their hometown. Will they be able to defeat the League of Lizards' giant Gila monster, or will they be stomped flat?

Peter Power and the League of Lying Lizards is the fourth chapter book in a new series of exciting stories about a young boy who has some rather crummy superpowers. Each story is full of humor, action, and fun, but the charm can be found in the heartfelt message about the power of family, friends, and having confidence.

Dave Bardin is an illustrator by day and, well, night too. When he's not drawing in his Stronghold of Seclusion he patrols the streets, protecting the innocent and vanquishing evil. Strangely, the source of his powers is also his one weakness--MASHED POTATOES!
Loading...
or support indie stores by buying on
(This book is on backorder)