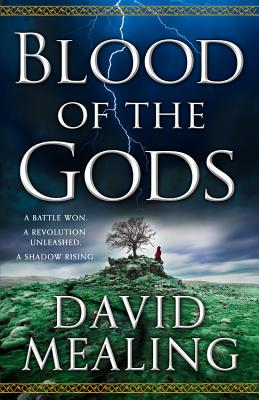 Blood of the Gods (The Ascension Cycle #2)

The battle is over, but war lies ahead in the second book of the epic fantasy trilogy that pits humans against gods in a contest for the fate of the world.

The battle for the city is over, but the aftermath of a revolution is never simple. . .

Sarine begins to experience visions, ones which make her dragon familiar sicker every day. Erris pushes toward conquest and the need to expand her territory and restore her power. And, exiled from his tribe, Arak'Jur apprentices himself to a deadly master.

Faced with the threat of a return to the days of darkness, the heroes begin to understand the depth of the sacrifices required from them. To protect their world, they'll have to stand and fight once more.

Read this second book in this gripping, vibrant, and imaginative addition to the epic fantasy canon for readers of Brandon Sanderson, Brian McClellan, and Miles Cameron.

Praise For Blood of the Gods (The Ascension Cycle #2)…

"The first book in The Ascension Cycle is an impressive fantasy debut with three main compelling characters and a unique magic system sure to capture a fantasy reader's attention . . . . Mealing does a fabulous job with the intricate world-building and leaves the reader wanting to get their hands on the sequel."—RT Book Reviews on Soul of the World

"A story of magic, ambition, greed, betrayal, and war."—Booklist on Soul of the World

David Mealing grew up adoring all things fantasy. He studied philosophy, politics and economics at the University of Oxford, where he taught himself to write by building worlds and stories for pen and paper RPGs. He lives in Washington state with his wife and three daughters, and aspires to one day own a ranch in the middle of nowhere.
Loading...
or
Not Currently Available for Direct Purchase