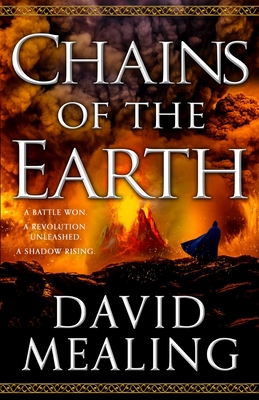 Chains of the Earth (The Ascension Cycle #3)

The epic story of a young street artist, a military general, and a warrior fighting for the fate of the universe comes to its thrilling conclusion in the final book of this fantasy trilogy. The Divide separating the east from the west, the realms of death from the realms of life, has fallen. Sarine and her champions find themselves overwhelmed, assaulted on every side by swordsmen, assassins, and skinchangers infiltrating, killing, and twisting even their most loyal allies against them. Every victory hides a defeat, and yet there is still hope. If Sarine can learn the true nature of her powers, she can make a final stand against the Regnant, to challenge him and remove his death grip on the world's heart. To find the truth, she must journey to a new continent and find new allies, rallying their strength, and wielding every strain of magic in the world in a final battle between life and death. Read the final book in this sweeping epic fantasy, perfect for readers of Brandon Sanderson, Brian McClellan, and Miles Cameron. The Ascension CycleSoul of the WorldBlood of the GodsChains of the Earth

Praise For Chains of the Earth (The Ascension Cycle #3)…

"The first book in The Ascension Cycle is an impressive fantasy debut with three main compelling characters and a unique magic system sure to capture a fantasy reader's attention . . . . Mealing does a fabulous job with the intricate world-building and leaves the reader wanting to get their hands on the sequel."—RT Book Reviews on Soul of the World

"A story of magic, ambition, greed, betrayal, and war."—Booklist on Soul of the World

David Mealing grew up adoring all things fantasy. He studied philosophy, politics and economics at the University of Oxford, where he taught himself to write by building worlds and stories for pen & paper RPGs. He lives in Washington state with his wife and three daughters, and aspires to one day own a ranch in the middle of nowhere.
Loading...
or
Not Currently Available for Direct Purchase