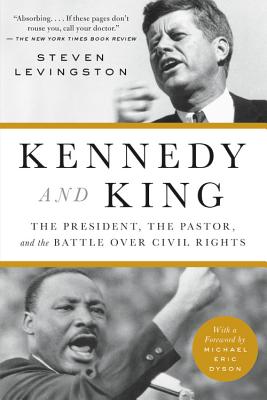 The President, the Pastor, and the Battle over Civil Rights

Kennedy and King traces the emergence of two of the twentieth century's greatest leaders, their powerful impact on each other and on the shape of the civil rights battle between 1960 and 1963. These two men from starkly different worlds profoundly influenced each other's personal development. Kennedy's hesitation on civil rights spurred King to greater acts of courage, and King inspired Kennedy to finally make a moral commitment to equality. As America still grapples with the legacy of slavery and the persistence of discrimination, Kennedy and King is a vital, vivid contribution to the literature of the Civil Rights Movement.

Praise For Kennedy and King: The President, the Pastor, and the Battle over Civil Rights…

"Comparing and contrasting disparate historical figures can easily be artificial, misleading, even gimmicky. Steven Levingston, however, has walked this tightrope magnificently. In his important new book, Kennedy and King, the rest of us get an unusual chance to study each leader in part through the other over a tumultuous, pivotal eight-year period. As is always the case with major contributions to our understanding, Levingston's is grounded in diligent research and detail.... Levingston's account of Birmingham, which chronicles the city's impact on each protagonist, is simply riveting. He is especially illuminating in following Kennedy's final steps when his attorney general brother nudged him to become 'the nation's first civil rights President.'"—Thomas Oliphant, The Washington Post

"Kennedy and King tells the story of two brilliant leaders who injected new meaning into the veins of American society. Together, their influence created a moral imperative that changed the U.S. and the world. Levingston's book is both historical and visionary. By reminding us of these great leaders and their accomplishments, this book will fuel your passion for the new work we still need to do in our society today."—Congressman John Lewis (D-GA)

"In this fascinating and timely book, Steven Levingston examines how these two young leaders in the early 1960s were being tested on the national scene--and testing each other. Despite their disparate backgrounds and personal styles, they came together to make history. Anyone who wants to understand America, the Civil Rights Movement, and the nature of leadership should read this book."
—Walter Isaacson, #1 New York Times bestselling author of Steve Jobs and The Innovators

"Steven Levingston's Kennedy and King is an unqualified masterpiece of historical narrative. Every page sparkles with literary verve, eloquent storytelling, and keen analytic judgment. It might be the best dual biography I've ever read. A landmark achievement which elevates civil rights history into a high art form."—Douglas Brinkley, #1 New York Times bestselling author of Rosa Parks and The Reagan Diaries

"As the moral courage of Martin Luther King Jr. came up against the political instincts of President John F. Kennedy--with both men trying to save their nation--a new history was set in motion. It's all brought to fascinating light in Steven Levingston's righteous book."—Wil Haygood, New York Times bestselling author of Showdown: Thurgood Marshall and the Supreme Court Nomination that Changed America

"History, politics, and ambition brought John F. Kennedy and Martin Luther King Jr. together in the early 1960s. Their relationship was personally complex, it was fateful for the nation, and it has never been told more compellingly."
—H.W. Brands, New York Times bestselling author of The General vs. The President

"Moral courage is the subject of this fascinating book. For Martin Luther King Jr. and, especially, for John F. Kennedy the path was rarely simple or straightforward. Steven Levingston has told a gripping, moving, revealing tale."
—Evan Thomas, New York Times bestselling author of Robert Kennedy and Being Nixon

"As I read Kennedy and King, I imagine two giants, reluctantly waltzing on a tightrope with no safety net. I see them stumbling, almost falling, the dance interrupted by distance but saved by a tepid, occasionally enthusiastic embrace. This history buff's paradise adds texture and context to explain the complexity of an ultimately productive partnership. Every few pages of this amazingly detailed work contain an uncommon revelation. Levingston has made an important contribution to the work on these leaders and their shared cause. I inhaled this book, and I loved it."—Julianne Malveaux, author of Are We Better Off?: Race, Obama and Public Policy and President Emerita, Bennett College for Women

"In this illuminating account Levingston charts the racial education of an ambitious Kennedy as he navigated the minefield of white southern bigotry and King's uncompromising moral vision and how, together, they transformed a nation."
—Pamela Newkirk, author of Spectacle: The Astonishing Life of Ota Benga

"Levingston ... contrasts the unstoppable forces of King's soaring oratory, Christian principles, and moral authority with the immovable objects of Kennedy's privilege, political calculation, and presidential power. Their push and pull unfolded in a cultural cauldron that encompassed the Montgomery bus boycott, the freedom rides, King's stints in jail, the children's crusade in Birmingham, Gov. George Wallace's segregationist stand at the University of Alabama, and the march on Washington."
—Publishers Weekly (starred review)

"[In] this bracing dual biography, Levingston (Little Demon in the City of Light) adds an upbeat, humanistic flavor to the intersecting lives of his subjects. This book will hold wide appeal."—Library Journal

"Steven Levingston's fascinating Kennedy and King reveals one of the most crucial American political relationships of the twentieth century, demonstrating the vital importance of great leadership during the time when the American civil rights movement was in the balance."—Michael Beschloss, New York Times bestselling author of Presidential Courage and NBC News Presidential Historian

"Levingston's writing on King is unfailingly perceptive and eloquent... Thanks to Levingston's impressive narrative skills, the spectacle of this president confronting the most divisive issue of his day is consistently fascinating."
—Christian Science Monitor

"[A] superb portrait of two gifted men and their
indelible impact on American history, chronicling the tortuous courtship--as
one's passion collided with the other's ambivalence--that finally wedded
them in the fight for civil rights, an outcome that was far from foreordained."

"Expertly highlights the interconnections
between these two seminal figures in mid-20th-century America... Dual
biographies are hard to pull off, but Levingston does it splendidly in his
portrait of two divergent personalities finally coming together, if only
briefly, over matters of gravest consequence."

"Insightful and well-crafted.... At a time when cynicism about our political system abounds, [Kennedy and King] reminds us that outsiders can prod those in power toward progress and reform."—Wall Street Journal

"Levingston is a captivating storyteller and his
account is both simple and profoundly moving.... [His] telling of the civil
rights battles is so timely: The monumental strides made by King and Kennedy
were not due to their immense talents, skills or political power. Ultimately,
the key was the unrelenting persistence that comes from moral courage. We just
have to find it again today."

Steven Levingston is the author of Little Demon in the City of Light, Kennedy and King, which was named a New York Times Editor's Choice selection and a Washington Post Notable Book of 2017, and Barack and Joe. The nonfiction book editor of the Washington Post, he has lived and worked in Beijing, Hong Kong, New York, Paris, and Washington and reported and edited for the Wall Street Journal and International Herald Tribune.
Loading...
or
Not Currently Available for Direct Purchase