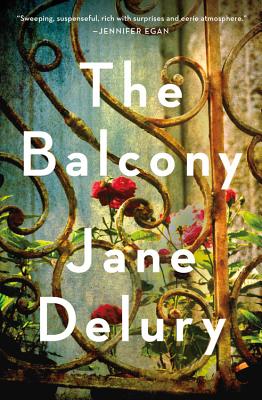 A "breathtaking" century-spanning portrait of the inhabitants of a French village (Jennifer Egan), revealing the deception, despair, love, and longing beneath the calm surface of ordinary lives.

What if our homes could tell the stories of others who lived there before us? Set in a small village near Paris, The Balcony follows the inhabitants of a single estate-including a manor and a servants' cottage-over the course of several generations, from the Belle vâpoque to the present day, introducing us to a fascinating cast of characters. A young American au pair develops a crush on her brilliant employer. An ex-courtesan shocks the servants, a Jewish couple in hiding from the Gestapo attract the curiosity of the neighbors, and a housewife begins an affair while renovating her downstairs. Rich and poor, young and old, powerful and persecuted, all of these people are seeking something: meaning, love, a new beginning, or merely survival.

Throughout, cross-generational connections and troubled legacies haunt the same spaces, so that the rose garden, the forest pond, and the balcony off the manor's third floor bedroom become silent witnesses to a century of human drama.

In her debut, Jane Delury writes with masterful economy and profound wisdom about growing up, growing old, marriage, infidelity, motherhood - in other words, about life - weaving a gorgeous tapestry of relationships, life-altering choices, and fleeting moments across the frame of the twentieth century. A sumptuous narrative of place that burrows deep into individual lives to reveal hidden regrets, resentments, and desires, The Balcony is brimming with compassion, natural beauty, and unmistakable humanity.

Praise For The Balcony…

"Shimmering... this multigenerational cast of
characters has the reach of an epic novel... The vivid intimacy of Delury's
canvas is enhanced by descriptive prose at once concise and lush."

"With the assurance of a seasoned pro, Jane Delury
spans decades, adopts a multitude of voices, and explores with
the keen-eyed sensibility of Elena Ferrante or Claire Messud marriage,
infidelity, motherhood, aging, money, greed, and the workings of fate. A
complex and utterly engaging debut."

"The Balcony is sweeping, suspenseful, rich with surprises and eerie atmosphere. Jane Delury arrives on the scene of her debut with a sensibility fully formed and a breathtaking array of writerly gifts at her command."—Jennifer Egan

"From the opening pages of The Balcony I was enthralled by Jane Delury's picture of Benneville and by her expansive sense of character. In ways both profound and moving she shows on page after beautiful page how her characters live inextricably in a time and a place. A stellar debut."—MargotLivesey, New York Times bestsellingauthor of Mercury

"A subtly crafted and richly rewarding debut book of fiction...reminiscent of Olive Kitteredge...It is no stretch to mention Delury and [Elizabeth] Strout in the same sentence: Delury's debut book, with wise observations, intriguing twists and indelibly drawn characters, is filled with reading pleasures...The Balcony is an American's love letter to France, and a compelling saga spanning France's past century."—The Washington Post

"Jane Delury's gifts as a writer of fiction are in such abundance here, it is difficult to know where to begin: her characters - each and every one - whether male or female, young or old, French or American, wealthy or just barely surviving, a child of the 20th century or one-hundred years earlier - are living, breathing human beings I came to love and, in some cases, to mourn. Her landscapes are rendered as deftly as an impressionist painter's, and the pacing of each narrative in this exquisitely rendered novel-in-stories is downright masterly. But, what I admire most about The Balcony, is the depth and range of its inherent humanity. I adore this book. It is a true work of art and a most impressive literary debut."—Andre Dubus III

"In
an assured debut, a delicate fretwork of lives, relationships, and secrets is
built up over the course of a century-and linked by a manor in an ugly French
village... Strikingly deft and
nuanced; a writer to watch."

"A satisfying puzzle of a debut
novel...Each chapter of the novel could be a full-fledged short story on its own;
together, they reveal a pattern that only completes itself with the final one."

"With immense
storytelling gifts and spare but luminous prose, [Delury] is one of the few writers
whose debut will have readers begging for a second novel...Delury is sure to
win the hearts of all those who appreciate a smart, elegantly written story."

"The Balcony is a delightful literary page-turner in the best sense of the word. I loved these characters, and the way Jane Delury has woven them together is wonderfully surprising, heartbreaking, and elegant. In terms of 'smart books about going abroad', it's up there with The Vacationers and Helen Walsh's The Lemon Grove. I was sad when it ended-always a good sign."—Katie Crouch, New York Times bestselling author of Girls in Trucks

"Not just an extraordinary first novel, The Balcony is the accomplished work of a writer already at ease with a rich combination of language, character and consummate storytelling."—Shelf Awareness

Jane Delury's fiction has appeared in Narrative, The Southern Review, Prairie Schooner, The Yale Review, and Glimmer Train. She has received a PEN/O. Henry Prize, the F. Scott Fitzgerald Story Award, a VCCA fellowship, and grants from the Maryland State Arts Council. She holds an MA in literary studies from the University of Grenoble, France, and an MA in fiction from the Johns Hopkins Writing Seminars. She teaches in the University of Baltimore's MFA in Creative Writing & Publishing Arts program.
Loading...
or
Not Currently Available for Direct Purchase