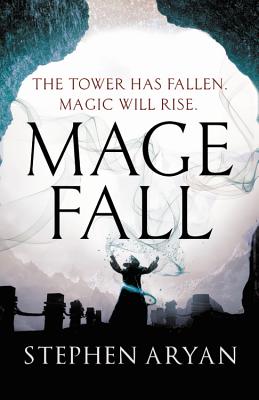 Magefall (The Age of Dread #2)

When magic is feared, the mages must learn to fight for themselves in this powerful sequel to the standout epic fantasy Mageborn by Stephen Aryan.

The land is in turmoil. Mages are hunted by men and gods alike. Even their own kind betray each other in the name of safety and protection.

With their last refuge fallen, two young mages must conspire against a god to show the world that their abilities aren't a curse; they are the only way to ensure lasting peace. Under the threat of anti-magic fanatics, Wren struggles to find her place as a leader and to keep her people safe as they build a new home. While Danoph searches for answers on a spiritual journey, determined to find out who he really is and where he came from in an effort to calm the coming storm.

Their world has turned against them, yet only they can save the world.

Praise For Magefall (The Age of Dread #2)…

"Strong offering that should appeal both to those who like their fantasy cynical and those who prefer it sentimental. "—Kirkus

"Will whet fans' appetites for the next installment in this gripping high fantasy series."—Publishers Weekly

"A propulsive combination of thrills, mystery, and magic."—B&N's Sci-Fi and Fantasy Blog on Mageborn

"Stephen Aryan puts the epic into Epic Fantasy. This is a ground-shaking debut, full of fiery promise"—Den Patrick, on Battlemage