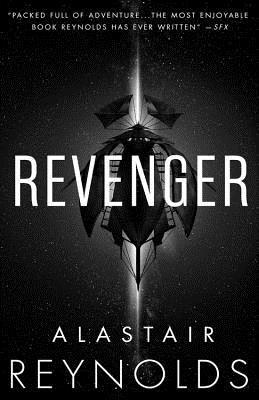 Revenger is a rocket-fueled tale of space pirates, buried treasure, and phantom weapons, of unspeakable hazards and single-minded heroism. . . and of vengeance. . .

Adrana and Fura Ness are the newest crew members of the legendary Captain Rackamore's ship, using their mysterious powers as Bone Readers to find clues about their next score. But there might be more waiting for them in space than adventure and fortune: the fabled and feared Bosa Sennen, in particular.

The galaxy is filled with treasures. . . if you have the courage to find them.

Praise For Revenger (The Revenger Series #1)…

"Revenger is classic Reynolds-that is to say, top of the line science fiction, where characters are matched beautifully with ideas and have to find their place in a complex future. More!"—Greg Bear

"Alastair Reynolds [is] one of the leading lights of the New Space Opera Movement . . . . Revenger is tremendous fun." —Locus

"Reynolds has sketched in a galaxy littered with the relics of former civilizations (human and alien), with plenty left to the reader's imagination, and room for a sequel."—Library Journal

"An expert mix of the fantastical and horrific."—Publishers Weekly (starred review)

"A blindingly clever imagining of our solar system in the far flung future."—The Sun

"By far the most enjoyable book Reynolds has ever written."—SFX

"The World of Revenger is undeniably fascinating, and with Reynolds as your storyteller, a journey into it is definitely worthwhile."—SciFiNow

"Basically, it's Treasure Island meets Moby Dick, set in space, with a nice Blade Runner-ish color palette and a cast of character worthy of a Terry Gilliam movie. I loved it."—Joanne Harris

"Reynolds makes the human story compelling in a narrative that, spiced with bizarre characters aplenty and propelled by vengeance, smacks intriguingly of everything from Robert Louis Stevenson's Treasure Island to Mad Max."—Nature

"A delightful romp through the spaceways."—Interzone

"The Revenger series is an emotionally raw trilogy about a space pirate crew looking for collapsed planets ... If you're looking for a fierce sister story, you will definitely enjoy Revenger."—Book Riot

"A must-read . . . an unexpectedly personal and emotionally-driven tale of determination and retribution - with some great twists along the way and a gutsy heroine who will appeal to fans of young adult literature."—Starburst