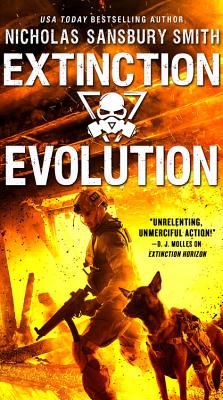 The fourth book in USA Today bestselling author Nicholas Sansbury Smith's propulsive post-apocalyptic series about one man's mission to save the world.

Central Command is gone, the military is fractured, and the surviving members of Team Ghost, led by Master Sergeant Reed Beckham, have been pushed to the breaking point.

Betrayed by the country they swore to defend and surrounded by enemies on all sides, Team Ghost has one mission left: protect Dr. Kate Lovato and Dr. Pat Ellis while they develop a weapon to defeat the Variants once and for all. But after a grisly discovery in Atlanta, Kate and Ellis realize their weapon might not be able to stop the evolution of the monsters.

Joined by unexpected allies and facing a new threat none of them saw coming, the survivors are running out of time to save the human race from extinction.

"It's great pulp.... The effect is something akin to watching movies like Independence Day and They Live. In other words, it's bound to be a cult classic."
—Men's Journal on Orbs

"An exciting new take on the end of the world and a thrilling race to survive... Sure to delight fans of survival and post-apocalyptic thrillers."
—A. G. Riddle, author of The Atlantis Gene on Helldivers

"Relentless action and danger in a gritty post-apocalyptic world where survival depends on a few brave men and women. Helldivers is one hell of a page-turner!"
—Bob Mayer, New York Times bestselling author of the Area 51 series on Helldivers

Helldivers offers genre fans everything they could ask for, from fresh takes on the post-apocalypse to social commentary reminiscent of Snowpiercer, and plenty of action."
—Shelf Awareness on Helldivers

"Military SF readers and fans of The Last Ship will find enjoyment in familiar ground."
—Publishers Weekly on Helldivers

Nicholas Sansbury Smith is the USA Today bestselling author of Hell Divers, the Orbs trilogy, and the Extinction Cycle series. He worked for Iowa Homeland Security and Emergency Management in disaster mitigation before switching careers to focus on his one true passion: writing. When he isn't writing or daydreaming about the apocalypse, he enjoys running, biking, spending time with his family, and traveling the world. He is an Ironman triathlete and lives in Iowa with his fiancée, their dogs, and a house full of books.
Loading...
or support indie stores by buying on
(This book is on backorder)