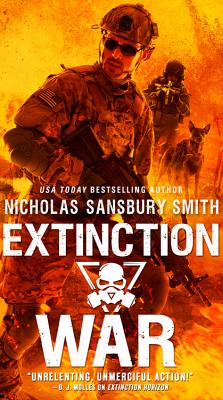 The seventh and never-before-published book in USA Today bestselling Nicholas Sansbury Smith's propulsive post-apocalyptic series about one man's mission to save the world.

In Europe, Master Sergeant Joe Fitzpatrick and Team Ghost return from a mission deep into enemy territory only to find that the Variant army has grown stronger, and they are advancing toward the EUF's stronghold in Paris.

Back in the United States, President Ringgold and Dr. Kate Lovato are on the run. The Safe Zone Territories continue to rally behind the ROT flag, leaving Ringgold more enemies than allies. But there are still those who will stand and fight for America. Captain Rachel Davis and Captain Reed Beckham will risk everything to defeat ROT and save the country from collapsing into Civil War.

"A blistering, high octane thrill ride to the brink of humanity's extinction. Nicholas Sansbury Smith plunges the reader right into the middle of the action, alongside a cast of unforgettable characters, as they fight tooth and nail to survive one impossible mission after another-to stop an extinction level virus. The Extinction Cycle series is post-apocalyptic, military science fiction at its best. Highly addictive!"
—Steven Konkoly, USA Today bestselling author

Nicholas Sansbury Smith is the USA Today bestselling author of Hell Divers, the Orbs trilogy, and the Extinction Cycle series. He worked for Iowa Homeland Security and Emergency Management in disaster mitigation before switching careers to focus on his one true passion: writing. When he isn't writing or daydreaming about the apocalypse, he enjoys running, biking, spending time with his family, and traveling the world. He is an Ironman triathlete and lives in Iowa with his fiancée, their dogs, and a house full of books.
Loading...
or support indie stores by buying on