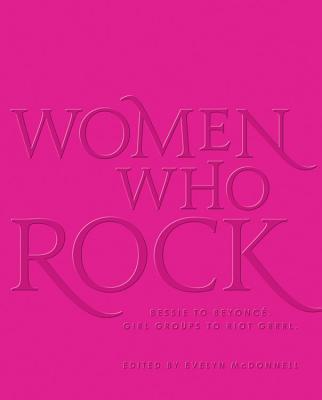 A stellar and unprecedented celebration of 104 musical artists, Women Who Rock is the most complete, up-to-date history of the evolution, influence, and importance of women in music. A gorgeous gift book, it includes a stunning, specially commissioned, full-color illustrated portrait of every musician and group.

From Bessie Smith and The Supremes to Joan Baez, Madonna, BeyoncÃ©Amy Winehouse, Dolly Parton, Sleater-Kinney, Taylor Swift, and scores more, women have played an essential and undeniable role in the evolution of popular music including blues, rock and roll, country, folk, glam rock, punk, and hip hop. Today, in a world traditionally dominated by male artists, women have a stronger influence on popular music than ever before. Yet, not since the late nineteen-nineties has there been a major work that acknowledges and pays tribute to the female artists who have contributed to, defined, and continue to make inroads in music.

In Women Who Rock, writer and professor of journalism Evelyn McDonnell leads a team of women rock writers and pundits in an all-out celebration of 104 of the greatest female musicians. Organized chronologically, the book profiles each artist and places her in the context of both her genre and the musical world at large. Sidebars throughout recall key moments that shaped both the trajectory of music and how those moments influenced or were influenced by women artists.

With full-color illustrated portraits by women artists, Women Who Rock will be THE long-awaited gift book for every music fan, feminist, and female rocker, young and old musicians.

Praise For Women Who Rock: Bessie to Beyonce. Girl Groups to Riot Grrrl.…

"Women Who Rock- which uses the word 'rock' not as a genre or noun, but as a verb - doesn't claim to be encyclopedic. Instead, it focuses on key game changers from around the world and proves that 'woman' is not a genre."—The Detroit News

"At a time when the #MeToo movement has galvanized women to take political action, [Women Who Rock] has taken on a greater resonance."—Brooklyn Based

"Women Who Rock is required reading for all of us, for it encourages us to look beyond our musical circles, to listen to those we have far too often placed at the margins of those circles, and to bring those we have marginalized into our circles, embracing them and empowering them as they have for so long empowered us."—NoDepression.com

"McDonnell has released, arguably, one of the best books, if not the best book of 2018...Throughout this wonderful pink-covered bible, McDonnell brings the readers into the world of many genres of music and some of those who defy any genre (Nina Simone, Lori Anderson, Tina Turner, Sharon Jones, Laura Jane Grace) while throwing in a few surprise musicians you may have never heard of."—Innocent Words

"Included essays offer portraits of diversity, from Patsy Cline's country melancholy to Joni Mitchell's folk-jazz to Missy Elliott's avant rap. Written by women and illustrated by women, this is a powerhouse collection that is completely, unapologetically celebratory. Revel in the greatness of Women Who Rock."—BookPage

"It's about damned time there was a collection dedicated to major women musicians. Women Who Rock is a neon-pink compendium of odes to legends past and present...[It] takes the rallying cry "Girls to the front" to another level."—Vulture

"When you read the profiles of musicians like Nina Simon, Tina Turner, Carole King, Debbie Harry, Kate Bush, Janet Jackson, Sleater-Kinney, and M.I.A chronologically, you gradually notice a common thread that runs throughout the book: these are extraordinary women who fought against the rock patriarchy and forged their own trailblazing path for themselves and other aspiring artists... [T]he first up-to-date collection of women musician profiles ... in over 20 years, and all of them penned by female music writers."—The Quietus

"McDonnell's lively chronological survey showcases more than 100 female musicians across numerous genres, including country, folk, hip-hop and punk. Short biographies of Joan Baez, Lady Gaga and Angélique Kidjo and many others are paired with colorful illustrations by such emerging talents as Julie Winegard. A bonus: playlists for each musician."—San Francisco Chronicle

"Edited by veteran music journalist and scholar Evelyn McDonnell, this stylishly illustrated coffee-table book is one you can drop into on any page and start reading. Dozens of writers including Peaches, Alice Bag, Vivien Goldman, Ann Powers, and Jenn and Liz Pelly offer up insightful essays on artists ranging from Bessie Smith to Poly Styrene to TLC. If you're a member of team "girls invented punk rock, not England" (or are looking to join), this book is for you."—Pitchfork, The Best Music Books of 2018

"Women Who Rock is required reading for all of us, for it encourages us to look beyond our musical circles, to listen to those we have far too often placed at the margins of those circles, and to bring those we have marginalized into our circles, embracing them and empowering them as they have for so long empowered us."—No Depression, Notable Books of 2018

Evelyn McDonnell is associate professor of journalism at Loyola Marymount University. She has been writing about popular culture and society for more than 20 years. She is the author of four books: Queens of Noise: The Real Story of the Runaways, Mamarama: A Memoir of Sex, Kids and Rock 'n' Roll, Army of She: Icelandic, Iconoclastic, Irrepressible Bjork and Rent by Jonathan Larson. She coedited the anthologies Rock She Wrote: Women Write About Rock, Pop and Rap and Stars Don't Stand Still in the Sky: Music and Myth. She lives in Los Angeles.
Loading...
or support indie stores by buying on