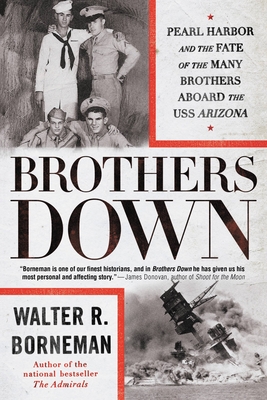 A deeply personal and never-before-told account of one of America's darkest days, from the bestselling author of The Admirals and MacArthur at War.

The surprise attack at Pearl Harbor on December 7, 1941 remains one of the most traumatic events in American history. America's battleship fleet was crippled, thousands of lives were lost, and the United States was propelled into a world war. Few realize that aboard the iconic, ill-fated USS Arizona were an incredible seventy-nine blood relatives. Tragically, in an era when family members serving together was an accepted, even encouraged, practice, sixty-three of the Arizona's 1,177 dead turned out to be brothers.

In Brothers Down, acclaimed historian Walter R. Borneman returns to that critical week of December, masterfully guiding us on an unforgettable journey of sacrifice and heroism, all told through the lives of these brothers and their fateful experience on the Arizona. Weaving in the heartbreaking stories of the parents, wives, and sweethearts who wrote to and worried about these men, Borneman draws from a treasure trove of unpublished source material to bring to vivid life the minor decisions that became a matter of life or death when the bombs began to fall. More than just an account of familial bonds and national heartbreak, what emerges promises to define a turning point in American military history.

Praise For Brothers Down: Pearl Harbor and the Fate of the Many Brothers Aboard the USS Arizona…

"A memorable book, one more telling of that awful day, and the different ways it ravaged families."—Wall Street Journal

"This well-organized book is a poignant look at the brothers who were serving aboard the USS Arizona...The moving and unusual angle, excellent research, and the prose's clarity and emotion make this one a winner. "—Publishers Weekly

"Many other books have detailed the events leading up to the Japanese attack on Pearl Harbor. But few of them have done so from the perspective of the sailors and Marines who were victimized that day, and none has used the unique point of view of the thirty-eight sets of brothers who were on board the ill-fated USS Arizona. By focusing on these eighty or so individuals from small towns and big cities, Borneman provides not only a unique frame of reference on the day of infamy, but a rich portrait of America in 1941."—Craig L. Symonds, author of World War II at Sea

"Walter Borneman is one of our finest historians, and in Brothers Down he has given us his most personal and affecting story-and one so immersive I often found myself holding my breath while reading his powerful account of the attack on the Arizona. It's that good."—James Donovan, author of Shoot for the Moon and A Terrible Glory

Walter R. Borneman is the author of nine works of nonfiction, including MacArthur At War, The Admirals, Polk, and The French and Indian War. He holds both a master's degree in history and a law degree. He lives in Colorado.
Loading...
or
Not Currently Available for Direct Purchase