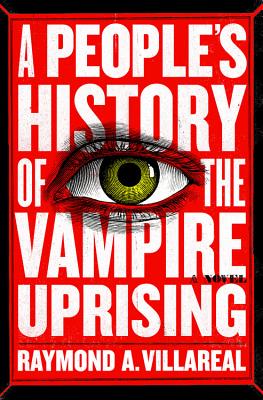 A People's History of the Vampire Uprising (Hardcover)

By Raymond A. Villareal

In this ambitious and wildly original debut -- part social-political satire, part international mystery -- a new virus turns people into something a bit more than human, upending society as we know it.

This panoramic fictional oral history begins with one small mystery: the body of a young woman found in an Arizona border town, presumed to be an illegal immigrant, disappears from the town morgue. To the young CDC investigator called in to consult with the local police, it's an impossibility that threatens her understanding of medicine.

Then, more bodies, dead from an inexplicable disease that solidified their blood, are brought to the morgue, only to also vanish. Soon, the U.S. government -- and eventually biomedical researchers, disgruntled lawmakers, and even an insurgent faction of the Catholic Church -- must come to terms with what they're too late to stop: an epidemic of vampirism that will sweep first the United States, and then the world.

With heightened strength and beauty and a stead diet of fresh blood, these changed people, or "Gloamings," rapidly rise to prominence in all aspects of modern society. Soon people are beginning to be "re-created," willingly accepting the risk of death if their bodies can't handle the transformation. As new communities of Gloamings arise, society is divided, and popular Gloaming sites come under threat from a secret terrorist organization. But when a charismatic and wealthy businessman, recently turned, runs for political office -- well, all hell breaks loose.

Told from the perspective of key players, including a cynical FBI agent, an audacious campaign manager, and a war veteran turned nurse turned secret operative, A People's History of the Vampire Uprising is an exhilarating, genre-bending debut that is as addictive as the power it describes.

Raymond Villareal is a graduate of the University of Texas School of Law, and is currently a practicing attorney. This is his first novel.

Praise For A People's History of the Vampire Uprising: A Novel…

"Vampire Uprising is well worth a bite: The creature-feature crew will discover that recognizable tropes can feel fresh, and readers who aren't horror fiends will find a beguiling entry into the thoughts of Dracula and his ilk living among us." (3 out of 4 stars)
—USA Today

"Relentlessly clever first novel...Villareal's cheeky blend of political satire and gothic thriller is enhanced by his background as an attorney and his deft use of convincing details...This wild ride of a novel proves that each era gets the vampires it deserves."
—The Washington Post

"A full-on vampire infestation - or is it a colonization? - hits Earth, as documented in this zippy read via a clever series of narratives, interviews, historical documents, and newspaper reports."
—Daneet Steffens, The Boston Globe

"Strikingly original . . . Daring, exciting . . . It's a wild ride in this world Villareal has created. . . . In 1976 with Interview with the Vampire Anne Rice smashed and recreated vampire mythology and lore--beginning a new era of vampire literature. Now perhaps it is A People's History of the Vampire Uprising's time to reinvent the genre."—Désirée Zamorano, Los Angeles Review of Books

"This page-turner is
just shy of being too smart for its own good."
—The Texas Observer

Included in Lit Hub's "Crime Reads" round up for the "Summer's Most Anticipated Crime, Mystery, and Thrillers,"
"Using vampires as stand-ins for those who experience other-ing by the state and as a way to explore growing xenophobia in the United States today"
—Lit Hub, -

"A wide-angle, wild and weird exploration of politics, pop culture, and a diseased America. This tale of misguided hero worship and encroaching terror may be the perfect analogy for our own strange times."
—Thomas Mullen, author of the Los Angeles Times Book Prize finalist Darktown

"Told in the jumbled, frenetic urgency of a discarded case file, this is the history of both a social movement and a vector for disease. Mr. Villareal's vampires are not the ones we find most comforting. They are not seductive or beautiful or tormented anti-heroes. No, they are more terrifying than anything like that, an infection that will spread throughout our body politic, our institutions, our history, and ourselves."
—Paul Park, author of The White Tyger and All Those Vanished Engines

"A major document dump--and that's a good thing! We have it all here: a complete oral history of how our world--our species--changed forever. Raymond Villareal's sense of fun is palpable as he plays with legal thrillers; good, old, dogged police work; international intrigue; hard science; dirty politics; and, yes, classic, heart-stopping horror. Somewhere, Dracula himself is sitting up late into the day enjoying the hell out of this."
—John Griesemer, author of Signal & Noise and filmmaker of the web series Parmalee

"A People's History of the Vampire Uprising is that rarest of rare creatures, an absolutely unique work of the writer's art that, while drawing on several distinct streams of narrative style, emerges from all of those rivers without any parallels... Villareal starts this brilliant sideways take on the vampire genre by setting up 'The Gloamings'--his sardonic name for the vampire changelings that are the book's driving force--as a problem for, get this, the Center for Disease Control, a witty--and risky--take that, in less skilled hands, could have forced the book into a narrative box car on a one-way track to Been There Ville. Because Villareal has the skills to hold several competing plot-lines and a cast of intriguing characters in his head and the talent to deal them out with economy, style, and a sardonic wit, the book becomes, among other gonzo things, a political parable for these lunatic times, a horror story, a trip down some of the darkest corridors of The Ancient World, and finally, an oddly epiphanic take on what it means, exactly, to be human. It cries out to be made into--not a movie--it's too good for that--but into a television series, and when this happens, and it will, I'll be binge-watching it.
Well done, Raymond Villareal. Welcome to the world of writers, and may God save your immortal soul."
—Carsten Stroud, author of Niceville
or support indie stores by buying on
Copyright © 2020 American Booksellers Association