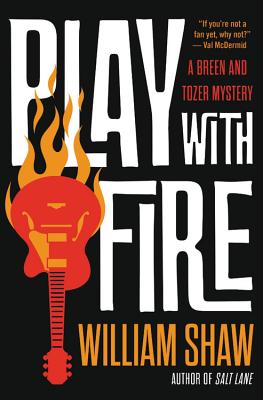 Play with Fire (A Breen and Tozer Mystery #4)

In hedonistic 1960s London, a police detective investigates the unexpected connections between two suspicious deaths: a call girl and a rock star.
In the summer of '69, the hard-living rockers of the British Invasion still rule London when former Rolling Stone Brian Jones is found floating in the pool of his palatial home. On a quiet residential block that should be far removed from the swinging party scene, Detective Sergeant Cathal Breen investigates the murder of a young woman. But the victim, known professionally as Julie Teenager, was a call girl for the rich and famous. Her client list is long, and thick with suspects-all rich, powerful, and protected. As DS Breen hones in on his prime target, he receives a pointed warning: Watch your back.
Fortunately, Breen doesn't have to work alone. His keenly intuitive, deeply moral partner Helen Tozer, despite the pregnancy that's interrupted her policing career, can't help being drawn into the case of a girl used and cast aside.
Tense and dramatic, unfolding at a blistering pace, Play With Fire is a gripping police thriller set in the darkly technicolor world of the 1960s.

Praise For Play with Fire (A Breen and Tozer Mystery #4)…

"Play With Fire does a first-rate job of evoking its period, a time when generations seemed at war with one another."—Tom Nolan, Wall Street Journal

"Big treat in store for fans. And if you're not a fan yet, why not?"
—Val McDermid, internationally bestselling author of The Mermaids Singing

"A new level of suspense for this must-read series"
—Booklist

"A fun visit to a bygone era... The contrast between the predictable stuffiness of 'proper' London and the vivid, if irresponsible, liveliness of the new generation is generally well handled and rewarding."
—Kirkus Reviews

William Shaw is an award-winning music journalist and the author of several non-fiction books including Westsiders: Stories of the Boys in the Hood. Prior to becoming a crime writer, he worked at the post-punk magazine ZigZag and a journalist for The Observer, The New York Times, Wired, Arena, and The Face. He lives in Sussex, England.
or support indie stores by buying on