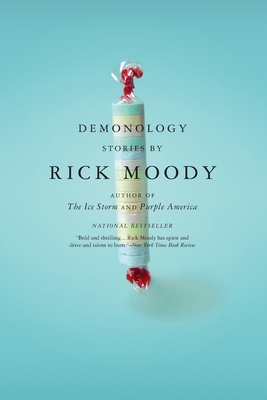 Rick Moody's novels have earned him a reputation as a "breathtaking" writer (The New York Times) and "a writer of immense gifts" (The San Francisco Examiner). His remarkable short stories have led both the New Yorker and Harpers to single him out as one of the most original and admired voices in a generation.

These stories are abundant proof of Rick Moody's grace as a stylist and a shaper of interior lives. He writes with equal force about the blithe energies of youth ("Boys") and the rueful onset of middle age ("Hawaiian Night"), about Midwestern optimists ("Double Zero") and West coast strategists ("Baggage Carousel"), about visionary exhilaration ("Forecast from the Retail Desk") and delusional catharsis ("Surplus Value Books: Catalog Number 13.") The astounding title story, which has already been reprinted in four different anthologies, is a masterpiece of remembrance and thwarted love.

Full of deep feeling and stunningly beautiful language, the stories in Demonology offer the deepest pleasures that fiction can afford.