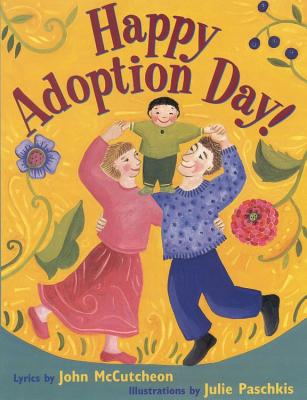 This adaptation of McCutcheon's song commemorates the day when a child joins an adoptive family. Complete with musical notation, these verses reassure adopted children they are special. Full-color illustrations.

John McCutcheon is an American folk music singer and multi-instrumentalist who has produced thirty-four albums since the 1970s. He is regarded as a master of the hammered dulcimer, and is also proficient on many other instruments including guitar, banjo, mountain dulcimer, fiddle, and jawharp. Julie Paschkis is a painter, textile designer, and award winning illustrator of books for children. Night Garden: Poems from the World of Dreams by Janet Wong was a 2000 New York Times Best Illustrated Book. Yellow Elephant by Julie Larios received a 2006 Boston Globe-Horn Book Honor Award Book. Many of her books have been named to Best Books of the Year lists including Glass Slipper, Golden Sandal by Paul Fleischman, which was a New York Times Notable Book, a BookSense Pick, a New York Times Public Library 100 Best Book, and a Kirkus Best Book for 2007.
or
Not Currently Available for Direct Purchase
Copyright © 2020 American Booksellers Association