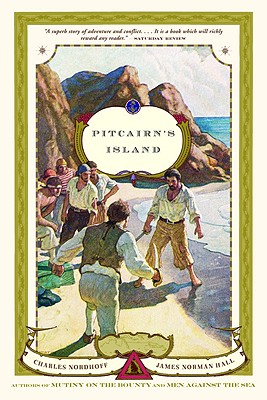 A "superb story of adventure and conflict" (Saturday Review), Pitcairn's Island follows the mutineers of the Bounty as they take refuge on the loneliest island in the Pacific.
In the annals of seafaring there is no more fascinating account of South Seas adventure than Pitcairn's Island. The novel unfolds a tale of desperation, profligacy, and betrayal as it chronicles the fate of Fletcher Christian, his fellow mutineers aboard H.M.S. Bounty, and a handful of Tahitians, who together take refuge on the loneliest island in the Pacific. Living undiscovered for eighteen years, the settlers of Pitcairn establish a primitive but thriving community whose peace is ultimately shattered by a struggle of bitter vengeance.
"An essential rounding out of a trilogy on the Bounty that ranks with the best literature pertaining to the sea." --Christian Science Monitor

"A genuine and thrilling tale...Pitcairn's Island serves with power and insight to bring out once again the classic outlines of the old Bounty drama, that incredibly perfect tragedy, full in every detail."—New York Herald Tribune