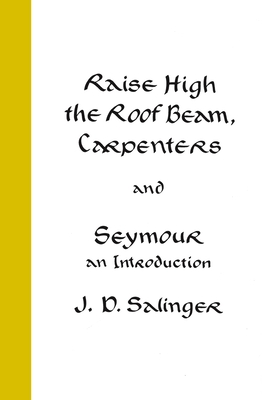 The last book-length work of fiction by J. D. Salinger published in his lifetime collects two novellas about "one of the liveliest, funniest, most fully realized families in all fiction" (New York Times).
These two novellas, set seventeen years apart, are both concerned with Seymour Glass--the eldest son of J. D. Salinger's fictional Glass family--as recalled by his closest brother, Buddy.
"He was a great many things to a great many people while he lived, and virtually all things to his brothers and sisters in our somewhat outsized family. Surely he was all real things to us: our blue-striped unicorn, our double-lensed burning glass, our consultant genius, our portable conscience, our supercargo, and our one full poet..."

"No American writer will ever have a more alert ear, a more attentive eye, or a more ardent heart than Salinger's."
—Adam Gopnik, New Yorker

"Salinger's final confrontation with all the strains of his earlier fiction: sentimentality, depression, Eastern philosophy, isolation, and the guilt of being happy."
—Chris Wilson, Slate

"We mustn't be blind to what Salinger has accomplished by virtue of his overabundant love...The Glass stories retain an extraordinary interest and appeal."
—John Romano, New York Times

"Oddly, the joys and satisfactions of working on the Glass family peculiarly increase and deepen for me with the years. I can't say why, though. Not, at least, outside the casino proper of my fiction."
—J. D. Salinger, -

J. D. Salinger was born in New York City on January 1, 1919, and died in Cornish, New Hampshire, on January 27, 2010. His stories appeared in many magazines, most notably The New Yorker. Between 1951 and 1963 he produced four book-length works of fiction: The Catcher in the Rye; Nine Stories; Franny and Zooey; and Raise High the Roof Beam, Carpenters and Seymour--An Introduction. The books have been embraced and celebrated throughout the world and have been credited with instilling in many a lifelong love of reading.
Loading...
or
Not Currently Available for Direct Purchase