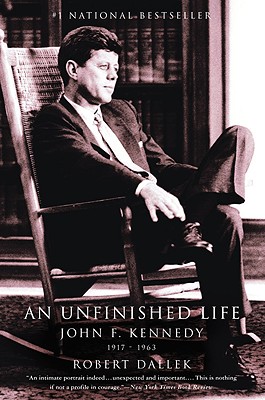 Drawing on previously unavailable material and never-before-opened archives, An Unfinished Life is packed with revelations large and small -- about JFK's health, his love affairs, RFK's appointment as Attorney General, what Joseph Kennedy did to help his son win the White House, and the path JFK would have taken in the Vietnam entanglement had he survived.

Robert Dallek succeeds as no other biographer has done in striking a critical balance -- never shying away from JFK's weaknesses, brilliantly exploring his strengths -- as he offers up a vivid portrait of a bold, brave, complex, heroic, human Kennedy.

"Comprehensive, judicious, evenhanded, original. An Unfinished Life has the sober judgment and nuanced accuracy that make it ring true in all the controversial and tricky parts."—Jack Newfield, Los Angeles Times

"An intimate portrait indeed . . . unexpected and important. . . . This is nothing if not a profile in courage."—Ted Widmer, New York Times Book Review

"It's hard to believe that someone could find anything new to say about John F. Kennedy, but Dallek succeeds in this riveting and well-documented biography."—The New Yorker

"One of the most engrossing biographies I have ever read. . . . An Unfinished Life is nothing less than a masterpiece."—David Herbert Donald, author of Lincoln

"Neither debunking nor further mythologizing, Dallek fashions a balanced but fast-paced tale of sex and power that scribes from Shakespeare to Jacqueline Susann would have killed for."—Steve Dougherty, People

Robert Dallek is one of the most highly regarded historians in America today and the author of more than a dozen books, including Nixon and Kissinger and his two-volume biography of Lyndon Johnson, Lone Star Rising and Flawed Giant. Currently a faculty member at Stanford University's prestigious Washington program, he has also taught at Boston University, Columbia University, UCLA and Oxford.
Loading...
or support indie stores by buying on