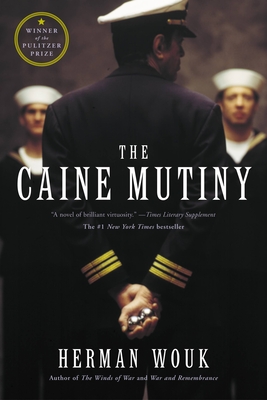 Winner of the Pulitzer Prize and a perennial favorite of readers young and old, Herman Wouk's masterful World War II drama set aboard a U.S. Navy warship in the Pacific is "a novel of brilliant virtuosity" (Times Literary Supplement).
Herman Wouk's boldly dramatic, brilliantly entertaining novel of life--and mutiny--on a Navy warship in the Pacific theater was immediately embraced, upon its original publication in 1951, as one of the first serious works of American fiction to grapple with the moral complexities and the human consequences of World War II.
In the intervening half century, The Caine Mutiny has sold millions of copies throughout the world, and has achieved the status of a modern classic.

Praise For The Caine Mutiny: A Novel of World War II…

"As a modern sea adventure it is absolutely first-rank reading."—Lee Rogow, Saturday Review

"At last! A war story which gives you a rounded view of the way men at war behave."—Kelsey Guilfoil, Chicago Tribune

Herman Wouk's acclaimed novels include the Pulitzer Prize-winning The Caine Mutiny; Marjorie Morningstar; Don't Stop the Carnival; Youngblood Hawke; The Winds of War; War and Remembrance; Inside, Outside; The Hope; The Glory; and A Hole in Texas.
Loading...
or support indie stores by buying on