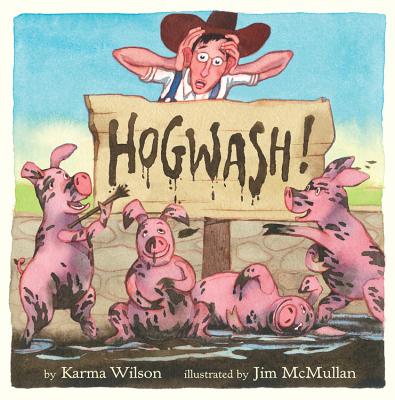 He washed the horses, ducks and cows
The goats, the cats and dogs.
Everything went dandy...
Until the farmer reached his hogs.

"No hogwash for us today. Pigs love dirt - so go away!"

Farmer's stubborn pigs refuse to be hogwashed, and no matter what he tries, poor Farmer cannot trick them into getting clean! But when several failed attempts leave him stuck in the mud, our determined farmer realizes his hogs may have been on to something all along... sometimes a mud bath is even better!

Karma Wilson is the author of the New York Times best-sellers Bear Snores On and Bear Wants More, both illustrated by Jane Chapman. She lives just outside of Bonners Ferry, Idaho.

Jim McMullan is an award-winning illustrator whose work has appeared in a variety of books for adults and young readers. He has been internationally recognized for his seventy posters for Lincoln Center Theater. McMullan received the New York Times Best Illustrated Book award in 2002 for the picture book I Stink!, and he has also won the Society of Illustrator's prestigious Hamilton King Award.
Loading...
or support indie stores by buying on