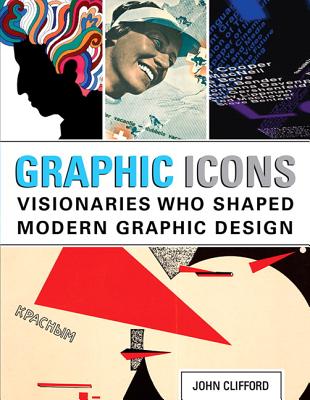 Who are history's most influential graphic designers?

In this fun, fast-paced introduction to the most iconic designers of our time, author John Clifford takes you on a visual history tour that's packed with the posters, ads, logos, typefaces, covers, and multimedia work that have made these designers great. You'll find examples of landmark work by such industry luminaries as El Lissitzky, Alexander Rodchenko, A.M. Cassandre, Alvin Lustig, Cipe Pineles, Paul Rand, Saul Bass, Milton Glaser, Wim Crouwel, Stefan Sagmeister, John Maeda, Paula Scher, and more.
Who coined the term graphic design? Who turned film titles into an art? Who pioneered information design? Who was the first female art director of a mass-market American magazine? In Graphic Icons: Visionaries Who Shaped Modern Graphic Design, you start with the who and quickly learn the what, when, and why behind graphic design's most important breakthroughs and the impact their creators had, and continue to have, on the world we live in.
Your favorite designer didn't make the list? Join the conversation at www.graphiciconsbook.com .

John Clifford is an award-winning graphic designer/creative director, and principle at Think Studio, a New York City design firm. His recent projects include collateral for The World Financial Center, the L.L. Bean 100th-anniversary book, web design for Maine Road Management, packaging for Paul Labrecque Haircare, and books on architecture, photography, and popular culture for The Monacelli Press, Yale School of Architecture, and Abrams. Previously, Clifford worked at Doyle Partners, Platinum Design, William Stout Publishers, and Chronicle Books, as well as in marketing and sales in the entertainment industry. He has designed for notable clients like Pantone, Saks Fifth Avenue, Martha Stewart, Barnes & Noble, and David Byrne. Clifford has also taught at Parsons School of Design, judged the I.D. Annual Design Review, and written for The Designer's Review of Books.
Loading...
or
Not Currently Available for Direct Purchase